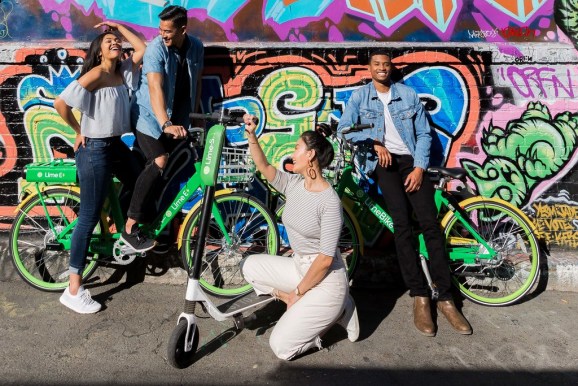 Red-hot mobility startup Lime announced it has raised a $335 million round of venture capital that is notable not only for its size, but also for the name of a critical participant: Uber.

The troubled ride-hailing giant will now begin renting Lime’s scooters via its app in addition to pumping its money into the startup, which offers a range of dockless transportation options, including electric scooters and bikes, as well as traditional bikes.

The round also includes money from Alphabet’s GV, IVP, Atomico, and Fidelity, in addition to money from previous investors a16z, Coatue, and Fifth Wall.

“The new funds will give us the ability to expand our operations globally, develop new technologies and products for consumers and build out our infrastructure and team,” wrote Lime cofounder Toby Sun in a blog post.

The partnership with Uber comes as the urban mobility sharing space is morphing rapidly. Both Uber and Lyft had expressed their intentions to enter the electric scooter space by applying for permits with the city of San Francisco. Last week, Lyft acquired acquired Motivate, a nationwide bike-sharing company that uses the more traditional docking system.

Ride hailing companies see companies such as Lime as potential threats given that the cost and ease of grabbing a bike or scooter could eliminate the desire to call a car for short-haul trips in cities.

“Uber will work with us as a strategic partner in the electric scooter space to offer people a greater variety of transportation modes at their fingertips and make it increasingly easy to live without a car,” Sun wrote. “As electric scooters grow in popularity and become a more beloved way to travel short distances, the partnership adds to Uber’s vision of becoming a transportation platform for people around the globe. We are working to co-brand our scooters and make Lime available in the Uber app, with more news to follow. We could not be more thrilled about this partnership and what it brings to riders everywhere.”

Lime, founded just 18 months ago, has been expanding like wildfire. The $335 million round is far larger than earlier reports that pegged the new round at $250 million. The company has now raised a total of $467 million and has pushed past $1 billion in valuation.

The company is an arms race of sorts against rival Bird, which has raised $400 million in venture capital for its electric scooter service. Lime said it would use the latest round to continue its global expansion beyond the 46 cities where it already operates.