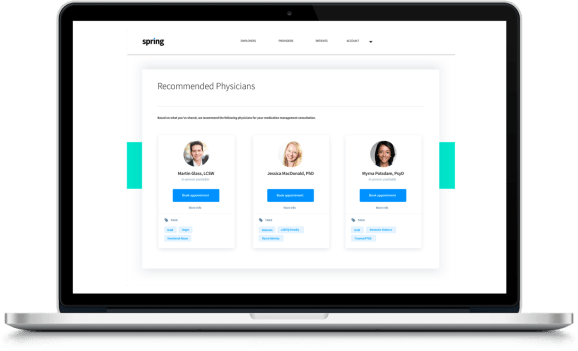 Online mental health company Spring Health today announced it has raised $6 million to grow its team and expand its predictive AI service that matches users with a mental health treatment plan beyond New York and California.

Spring Health gets its intelligence from initial trials, as well as ongoing data collected from users of the platform at large companies like Niantic.

The company can recommend exercise, meditation, medication, or an appointment with a psychotherapist.

“We can get as granular as the specific dose of medication that you should take, but we recommend [options other than] medication a lot of the time,” said Spring Health CEO and cofounder April Koh.

“Just being really close to her through this time, I realized that mental health care is really a guessing game. One size doesn’t fit all, and doctors use a lot of trial and error in treating patients,” Koh told VentureBeat in a phone interview.

Spring Health was created by Koh, along with Abhishek Chandra and Yale assistant professor Adam Chekroud, in 2016.

“We used some of the largest clinical trials on depression and other mental illnesses to build our initial algorithms, and since then we collect a lot of data through our own product and use that data to create or expand on our existing models,” she said. “The data inputs are all behavioral and all self-reportable. It’s not blood tests, It’s not genomic samples. It’s not saliva samples. It’s just questions you can answer yourself through a digital questionnaire.”

Spring Health asks users questions related to gender and race, but also things like level of education and whether they suffer from insomnia.

The round was led by Rethink Impact, with additional investments from Work-Bench, BBG Ventures, and NYC Partnership, each led by women. A survey earlier this year found that women are twice as likely to be diagnosed with depression.

The $6 million rounds brings the company’s total raised to $8 million.