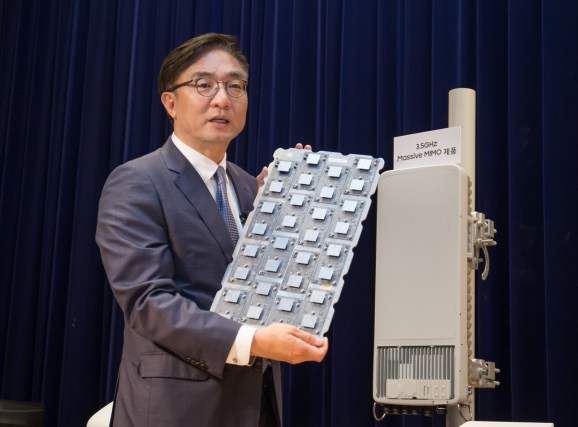 Samsung has announced that it will have both 3.5GHz and 28GHz hardware ready in time for South Korea’s upcoming launch of next-generation 5G networks, which will take place in two stages: initial 5G transmissions will begin on December 1, 2018, with “full-scale commercialization” following in March 2019. Beyond buoying South Korea’s own 5G infrastructure, the company’s commitment could reduce demand for Chinese rival Huawei’s 5G equipment across the globe.

As initially reported by Yonhap News (via Samsung Central), Samsung used a press conference to announce new 3.5GHz network hardware, which some had assumed to be a missing link in its 5G strategy. Similar to the radio hardware found in existing 4G/LTE networking gear and devices, the 3.5GHz networking gear is fairly straightforward to make. It uses 64 antennas and 100MHz of radio bandwidth to offer high data speeds, and is easy to integrate into smaller mobile devices.

For that reason, Korean and other carriers have chosen 3.5GHz as their “primary band” for nationwide 5G, but will also use “millimeter wave” 28GHz radio bandwidth to provide 5G services in urban areas. Samsung previously focused heavily on developing millimeter wave 5G technology, which uses 1,024 antennas and 800MHz of bandwidth, sending massive amounts of data over relatively short distances. The company’s 28GHz hardware will be used in Verizon’s initial 5G rollout in the United States, which will begin with home broadband services, but its future in handheld devices is uncertain.

Samsung’s involvement in creating next-generation cellular hardware for multiple carriers has made it a significant source of 5G release date information. In addition to confirming that it will have hardware available for the December 1 commencement of 5G transmissions in South Korea, the company’s network head Kim Young-ky also signaled two U.S. carriers’ timelines. He said that Verizon’s 5G deployment will formally begin in the third quarter of 2018, while Sprint — currently in the midst of a potentially equation-changing merger with T-Mobile — is still expected to use Samsung 2.5GHz hardware for 5G in 2019.

The announcements are also significant because they appear set to undercut China’s Huawei, which has been pitching inexpensive 3.5GHz networking gear to carriers across the world — despite operating under a cloud of 5G security concerns surfaced by the U.S. government. While Huawei is offering hardware at a 20 to 30 percent discount, Samsung says that its 3.5GHz 5G gear will be both “safer” and smaller than Huawei’s — the smallest, it says, of all standards-compliant 5G hardware.

“Just as people consider trust when picking a security company,” said Kim, “Samsung is the most trustworthy in the business.” He committed to an aggressive, quick response if anything went wrong with 5G security in the future, unlike rivals. Huawei has already been frozen out of the United States’ 5G network deployments, and is expected to be precluded from supplying network gear in Australia, as well.