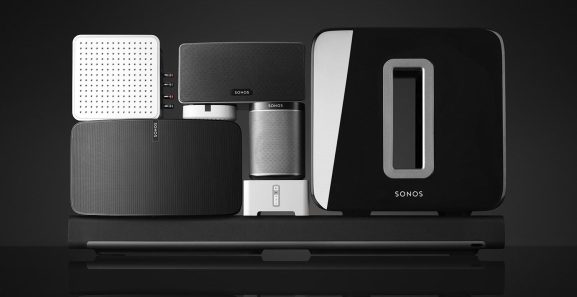 Several of Sonos's popular speakers may be affected by a 10 percent trade tariff.

A $200 billion list of Chinese-made products facing 10 percent U.S. tariffs currently includes select Apple Watch, Fitbit, and Sonos speaker models, raising the prospect of higher prices on some popular consumer electronics this fall. As Reuters reports, the U.S. is currently taking public comments on the list, which may or may not be implemented as part of an ongoing trade dispute between the U.S. and Chinese governments.

On a positive note for U.S. consumers, relatively few Apple, Fitbit, and Sonos products appear likely to be affected by the 10 percent price increase. The only items specifically named are the original Apple Watch; Fitbit’s Charge, Charge HR, and Surge wearables; and Sonos’s Play:3, Play:5, and Sub speakers. Each of these products was classified by the U.S. under an “obscure” category called “data transmission machines,” while later products may have been placed in other categories.

As neither Fitbit nor Sonos itemizes sales of individual products, it’s hard to estimate the impact this would have, but it could range from trivial to significant. Fitbit’s site no longer focuses on any of the named wearables, but Sonos still sells all three of the listed speakers. Play:3 is currently listed as “out of stock” on Sonos’ site, which is to say that unless it’s being replaced with a new model, future shipments might jump $25 in price from the current $249 level.

This particular tariff may have zero impact on Apple. The company discontinued the original Apple Watch, now known as Series 0, after introducing Series 1 and Series 2 models years ago. Even current-generation Series 3 Apple Watches are highly likely to be supplanted in September by larger-screened and more capable Series 4 versions. Additionally, Apple has previously avoided tariffs on iPhones and other products that are assembled in China using parts from across the world.

However, it’s unclear whether newer models of the Apple, Fitbit, and Sonos devices have the same or different classifications. Trade experts consulted by Reuters noted that the only reason the named products are publicly known to be classified as “data transmission machines” is that “their makers asked regulators to rule on their proper classification.” While newer models may have been differently classified, they may not have been, and if that’s the case, their prices might go up across the board.

Companies affected by the tariffs can attempt to get the codes dropped from the list during the public comment period, apply for an exclusion, or try to change their products’ classification codes. Alternately, they could just accept the tariffs for the duration of the trade dispute and hope that consumers will deal with the higher prices.