Around one third of the food produced each year — 1.3 billion tons of it — is either lost or wasted, according to data from the United Nations’ Food and Agriculture Organization. That’s the equivalent of flushing $1 trillion worth of perfectly edible food down the toilet.

Against that sobering backdrop, Karma, a marketplace that’s setting out to reduce food waste, has raised $12 million in a series A round of funding led by Swedish investment firm Kinnevik, with participation from Bessemer Venture Partners, Electrolux, and E.ventures, among others. This takes the company’s total funding since its inception to $18 million.

Karma is only available in Sweden and London for now, but with its fresh cash injection it said that it plans to hire for more than 70 new roles by the end of 2019 and expand into more international markets. The first port of call will be Europe, but the U.S. is firmly in the company’s crosshairs too.

The Karma app works similar to other food-ordering apps you have probably used. You create an account and can see what’s available in your locale. It’s basically whatever food outlets have an excess of — it could be cakes, bread, sandwiches, macarons, or freshly squeezed lemonade — so you won’t have a consistent choice of goods on a day-to-day basis. 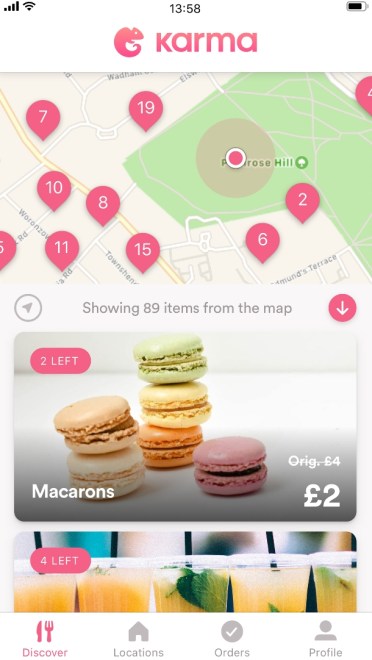 Above: Karma on iPhone

Founded out of Stockholm in 2015, Karma was a different proposition in its early days — it was more of a discounts and deals program, a little like Groupon. But the company pivoted to avoid confusing its users with such a broad range of offers.

“It quickly became apparent to us that all the different offers were confusing to the users of Karma, and we decided to narrow it down to just a few — or even one category,” Karma CEO and cofounder Hjalmar Ståhlberg Nordegren told VentureBeat. “One of the more popular categories in that early application was food, and when looking closer at what was actually selling, it turned out to be surplus food that restaurant owners added to the platform.”

The founding team then looked into the global food waste problem, and that became the genesis of Karma in its current incarnation. It’s also another classic example of a sort of “accidental” user-led evolution within an early-stage startup — look at how users are actually using the platform, and build out from there.

Karma is part of a global trend we’re seeing where companies are building businesses around the concept of “cutting waste.” London-based Winnow raised $7.4 million last year to help commercial kitchens measure their food waste, while San Francisco-based Full Harvest raised $2 million last year to help farmers find a home for ugly fruit. Last week, Unmade — based in the U.K. capital — raised $4 million for an on-demand clothes manufacturing platform that enables brands to only produce garments that are actually sold, rather than mass-producing thousands of items in advance.

“Karma turns would-be wasted product into bargains for customers and profit for merchants — this makes way too much sense not to exist in this world,” noted Bessemer Venture Partners’ Kent Bennett. “Beyond the product today, we think owning the communication links between customers and their favorite local merchants could have enormous long-term value.”

At the time of writing, Karma has signed up more than 1,500 food outlets such as restaurants, hotels, grocery stores, cafes, and bakeries to sell their surplus goods to around 350,000 Karma users. It really is a win-win situation — retailers can monetize food that wood otherwise end up in a landfill, while consumers can land big savings. And it’s this business model that could help the platform gain steam: To make the platform more attractive to food sellers, it really has to be a for-profit initiative rather than asking them to donate.

“To have a lasting and meaningful impact companies around sustainability need to be for-profit and have an attractive business model,” added E.ventures partner Jonathan Becker.