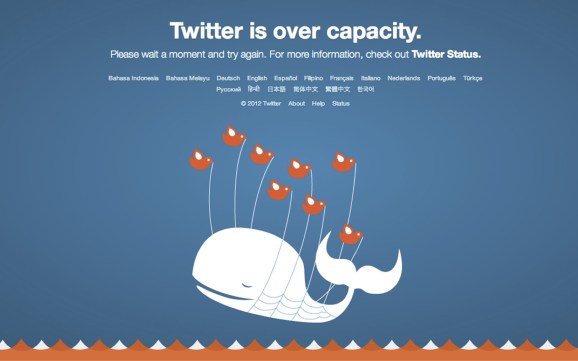 Having just returned from vacation this week, I’m struggling with a decision I would hope all journalists and news organizations are confronting: whether to finally quit Twitter.

Yes, yes, I know. The “Why I quit social media” is the most narcissistic, self-indulgent subject of our time. Every time I see a why-i-stopped-tweeting Medium post, I want to roll my eyes into the back of my head and smash my head through a coffee table. Which is why when I deactivated my Facebook and Twitter accounts for several months last year I did not issue a press release and stand on top of a mountain blowing a trumpet for a big Look-At-Me! moment.

A year later, however, fresh off a shorter social media pause, I plugged back in to discover that the world was still debating how awful Twitter is and what to do about it. The latest addition to this well-worn genre was Kara Swisher’s advice on how to fix Twitter: “Rules Won’t Save Twitter. Values Will.”

I couldn’t agree more when Swisher writes: “Twitter is doubling down on the same squishy point of view that has allowed too much of it to become a cesspool over the last several years, and it has little intention of truly cleaning up.”

But then Swisher offers a remedy that involves embracing “values” and “curating your offerings.” This would involve some tough decisions on Twitter‘s part. But it will never happen, for a couple of reasons.

First, Twitter, Facebook, Google and their like are legally protected by the notion that they are open platforms allowing communications and are most definitely not media companies. Like the phone companies, they can’t be held responsible for what people do or say on their services because, hey, they’re just providing a communication tool. Once they get into “curating,” or whatever, they risk tiptoeing over a line that holds them legally responsible. So while they make limited efforts involving machine learning and safety teams and whatnot, they are always only going to take on the most extreme cases and enforce standard rules.

Meanwhile, we have been having this conversation about how to fix Twitter for just about forever. Following a high-profile harassment case, the Guardian wondered whether social media giants might finally be labelled as publishers rather than platforms and forced to accept more responsibility:

Twitter has spent the past few days doing a good impression of a company hoping that the public outcry over rape threats against Caroline Criado-Perez would quietly go away. It is easy to see why. To adopt many of the measures being demanded by those who want social media giants to take more responsibility for the content their users produce would mean a huge shift in their business models — and even the way they define themselves.

Since then, of course, we’ve had Gamergate, and the 2016 elections. And despite all the happy talk, and the “we’re trying” talk, and the “we’re making progress” talk, the game remains the same. Just this week, actress Ruby Rose quit Twitter after the announcement she had been cast as Batwoman led to a storm of hate tweets. This comes just a few weeks after a 14-year-old actress from Netflix’s Stranger Things quit Twitter after she became the subject of a “homophobic meme.”

These are not problems to be solved, or design flaws, or aberrations of some kind. This is fundamentally what Twitter is: a place, as Swisher wrote, that is the “last big refuge of the repugnant.” It is a sickening cauldron of harassment, hate, racism, anger, and lies. It‘s no wonder that its most iconic user is now Donald Trump, who has discovered he can write what he wants with impunity, including calling an African-American woman a dog, threatening nuclear war, and lobbing constant insults and threats at opponents.

Hey, it’s “news,” so it’s all good! What a wonderful public service Twitter offers, enabling this daily, hate-fueled tweeting by our commander in chief. If Twitter is the new Town Square, as it likes to claim, then the future is basically a civic dialogue defined by virtual fistfights.

The bottom line, as always, is the bottom line. Whatever high-minded, free speech, utopian rhetoric a company like Twitter wants to wrap itself in, it is a publicly traded entity that needs to make more money and convince investors it is growing. Over the past year, Twitter has done that in spades — at one point its stock price had tripled over the past year (though it has since fallen sharply).

This is an indication that for all the hand-wringing of ethicists and journalists and pleas for civility, the Hate Culture that drives Twitter is good for business. So it will never change. It will always be Twitter‘s central, defining identity.

So all members of the media must make a choice. Every time someone like Swisher (or me, to a much lesser extent), tweets, or retweets, or replies, or whatever, we are helping Twitter make money. Yes, just a tiny, tiny bit each time. But more importantly, our presence continues to give the company cover. Journalists were among the most enthusiastic early adopters. Tweets and Twitter accounts have long been publicized on TV shows, giving the company a huge boost in public awareness even as most of the U.S. public doesn’t actually use it, or really even understand it.

Such participation continues to legitimize Twitter. Each time a journalist tweets — creating engagement and starting a conversation — it gives a toehold to Twitter‘s claim that it enables some kind of civic good. It allows executives to continue dithering in public, expressing remorse publicly while taking the bare minimum when it comes to action and yet somehow maintaining the appearance that Twitter is really concerned. It is not. It never will be.

Unless people abandon it. Particularly journalists.

Look, it’s not an easy decision. I get that. Having been on Twitter for more than a decade, I have a deep emotional attachment to it. I do have some intelligent conversations there, and it’s still great for breaking news.

In an essay last week, City University of New York professor Jeff Jarvis argued that such social platforms are in their early days, still evolving, and that it’s essential journalists and media organizations continue to engage in order to shape the nature and quality of conversations:

Instead, we should view the evolution of the internet in context. First, it is vital to judge the totality of the value of the platforms and the net. Without them, we would not have #BlackLivesMatter, #MeToo, and the voices of the Parkland students, and Americans would not now finally see how often white people call the police on others who are living their lives while black. Look at your Facebook feed. I challenge you to find the infestation of Nazis in it (unless you already consort with them). You’ll find cats and cheese. You’ll find friends sharing babies or illnesses, reaching out for connection. You’ll find people who have not been spoiled or addicted by technology, who still have agency, ethics, and intelligence.

True, but I find that more likely to be the case when I visit Facebook, with its own tremendous flaws, than Twitter. On Twitter, when I stop by, I mostly see yelling, anger, and lies that prompt new cycles of recriminations that are ultimately futile. I’m no longer convinced that whatever public good exists within Twitter‘s rotting walls will ever triumph over its central Hate Culture.

And besides, Twitter is not the internet. Twitter is Twitter. Am I really obligated, as a journalist, to do daily battle to improve the quality of someone else’s product? CEO Jack Dorsey seemed to think so when he weighed in on the controversies with a tweet I’m pretty sure managed to alienate just about every journalist on the planet:

Accounts like Jones' can often sensationalize issues and spread unsubstantiated rumors, so it’s critical journalists document, validate, and refute such information directly so people can form their own opinions. This is what serves the public conversation best.

It was a boneheaded thing to say, no matter the underlying sentiment. Our business models have been disrupted, we’re under attack daily by an unhinged president and his rabid right-wing followers, but in our free time also need to fact-check the contents of someone else’s service? No thanks.

And yet, Twitter is addictive, for all of its awfulness. I’m struggling to stay away from it even as I write this. I have had a service set up this week to delete all my tweets, and I still haven’t been able to pull the trigger even though I know that most of these tweets were ephemeral and wouldn’t be missed by anyone if they vanished.

This is where I stand: on the verge of taking that definitive leap away from Twitter. No longer convinced I want to be part of its ugliness. But not quite able to step off the precipice.

So I’m asking for someone who can talk me down from the ledge: If you are staying on Twitter, why?