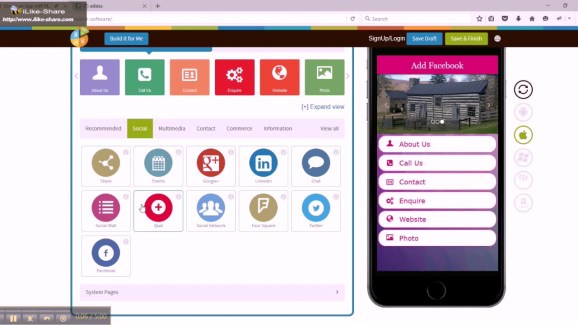 Building an app for your business from scratch isn’t easy — particularly if you’ve never written a line of code before. Yet the incentive to grab mobile app stores by the horns has never been stronger. According to analytics firm App Annie, global mobile app downloads will reach 284 billion by 2020, and in the past year on Android alone, the total time spent in apps grew a whopping 63 percent.

That’s why Abhinav Girdhar, a web and software development entrepreneur, founded Appy Pie, a cloud-based app creation service that’s built on top of visual, easy-to-use utilities that don’t require a computer science degree. He claims that most of the company’s customers create and publish apps in under 10 minutes.

“It is critical that businesses leverage technologies that help streamline business processes and gain more of the most valuable commodity of all: time,” Girdhar said.

It all starts with a template. Within Appy Pie’s App Builder for iOS and Android, users choose from categories like business, worship, education, fashion, contractor, and dozens of others in the ever-growing Appy Store. Then, using a robust suite of WYSIWYG drag-and-drop tools, menu selectors, text editors, and more, they customize the app’s look and feel before moving on to the next step: publishing the finished product.

With the exception of each app stores’ developer registration fees, Appy Pie’s base subscription tier is free, but nonremovable ads are inserted into each published app, and there’s a 48-hour usage limit on editing tools. The Basic tier, which starts at $36 per year, removes the ads and adds support for native Android app deployment. Gold ($60 per year) adds iOS support and distribution to the mix. And Platinum ($120 per year) supports all of the aforementioned platforms in addition to Windows 10, the Amazon Appstore, and BlackBerry World.

Girdhar thinks the next frontier in automated app design is artificial intelligence (AI).

“AI and machine learning have proven to be terrific tools to help automate and simplify business processes, which is why we’ve decided to be the first DIY platform to integrate them into our platform,” he said.

Appy, the first of the two, is a chatbot that walks users through the app creation process, and through natural language processing enables them to build apps using nothing more than voice and text commands. (It taps Siri for voice chat.) It’s smart enough to anticipate questions based on previous responses, and it’ll soon be available as a standalone skill on Amazon’s Alexa platform.

“We’re especially excited about our new AI Assistant,” Girdhar said. “With this, soon people will be able to create apps by asking Amazon’s Alexa. It doesn’t get much easier than that.”

The second tool analyzes the content of web pages and uses predictive analysis of historical data to automatically personalize apps.

Appy Pie might have gotten its start in drag-and-drop app development, but its ambitions are much grander than that.

In August, it announced the Appy Pie Website Builder, a visual webpage creator with offline capabilities, messaging features, and one-tap access to a smart assistant that’ll guide users through the process.

And in July it launched Connect, an IFTTT-style automation tool that shares data among Salesforce, Zoho, Stripe, Gmail, and Google Calendar. It can be configured to upload attachments from incoming emails, for example, or copy spreadsheets from Google Docs to Microsoft Word in Office 365.

Appy Pie, which has offices in London, New Delhi, and Virginia, has a staff of more than 200 people. It generated $5 million in revenue in March 2016, according to Girdhar, and today thousands of apps are created on the platform every 24 hours.