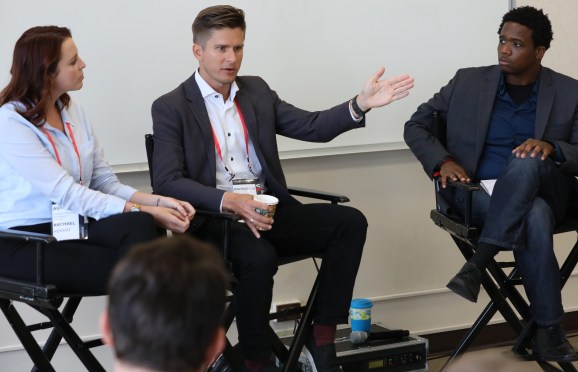 The simple customer service chatbot often promises more than it delivers — struggling to understand requests using natural language processing (NLP) and awkwardly performing the handoff to a human when the automated experience fails. “The biggest problem is, when you get transferred, not all the information makes its way over,” said DigitalGenius co-founder Mikhail Naumov at the VentureBeat’s Transform 2018 conference in Mill Valley.

“About a year into business, we discovered the natural limitation of scripted chatbots,” said Naumov. “We chose to … rip out the NLP engine we’d been using and put in a deep learning framework, which can train on historical customer service chat logs and email transcripts.” DigitalGenius provides this next-generation of AI customer support to call centers at about 50 companies worldwide, including giants like BMW and KLM Royal Dutch Airlines.

Last month, DigitalGenius announced a new level of support called Conversational Process Automation. Going well beyond question-answering bots, the service actually resolves requests. “Let’s say you’re asking for a refund,” said Naumov. “The AI model will understand this kind of request in this conversation. It will then trigger a backend sequence of processes that will happen in order for that customer serviced to be solved.”

KLM, one of the companies that piloted the technology (apologies for the unavoidable pun), is able to handle twice as many customer messages as it did last year, said Naumov. He added that online education platform Magoosh is autoresolving 10 percent of its total case volume after one week, while cutting queue time in half, and online travel agency TravelBird has actually turned its contact center profitable.

Beyond better understanding the intention of the customer, Autodesk is developing the ability to understand the mindset, even the mood of a customer. Last year, the design software maker partnered with New Zealand AI and effects company Soul Machines to transform Autodesk’s cartoon-style animated chatbot Ava into an amazingly lifelike avatar. Built from extensive scans of a human model, Ava is also equipped with emotional intelligence to read details like a customer’s gaze and tone of voice.

“Soul Machines’ technology can actually read your facial expressions and respond to them,” said Rachael Rekart, director of machine assistance at Autodesk. “So if you show frustration, she will offer to [transfer] you to a person. If you all of a sudden look away from the screen when she’s talking to you, she will ask you if you want to take a pause.”

What people see in Ava is as important as what she sees, based on Autodesk’s user research. “When we put up something that was a line drawing or a caricature, the expectation was that the onus of the work was on the customer. They [thought they] were basically going to get search engine results,” said Rekart. “Whereas when we went with a more human-looking avatar, the expectation was that you were going to be guided to a resolution.”

Research also showed that people prefer interacting with a female character. (Autodesk’s original assistant was male). And for broadest appeal, they went with an “ethnically ambiguous” appearance, to make it clear Ava is a bot. She’s introduced that way, and her purple eyes are a further clue that she’s not human.

Naumov and Rekart agree that even the best AI assistants have their limits, both logistical and psychological. “You should use a bot for interactions that are simple, that are repetitive, and that are time-sensitive,” he says. A customer who missed a flight and needs to quickly reschedule one can’t wait for a call or email from a human, for instance. Resolving simple, common requests is also the low-hanging fruit, saving lots of money easily and demonstrating ROI to DigitalGenius’ clients, according to Naumov. “It’s not about selling AI,” he said. “It’s about selling a solution to a problem that they know they have.”

Psychologically, customers are unwilling to work with bots for complex or expensive matters. “For really high dollar-value things where there’s a lot at stake, there’s a lot of trust needed,” says Rekart, “even an anthropomorphic bot can’t do that level of trust.”

At least not yet.

Rekart intends to evolve Ava to the digital concierge for all of Autodesk, one that can represent the company in all types of interactions, including sales. Autodesk also intends to build Ava’s intelligence and learning capabilities so that she can collaborate with clients on design iterations, even learning their intentions and making proactive suggestions.

Going even further, Rekart predicts that advanced AI assistants will become trusted partners in sensitive healthcare matters. She’s backing that up by going to school for a masters degree in psychology. Rekart points to uses by the military in PTSD counseling, for instance. Soldiers “have that, I don’t have to hide it because it’s a machine [notion],” she says. “But I do want to engage with it because it kind of looks like a person.”