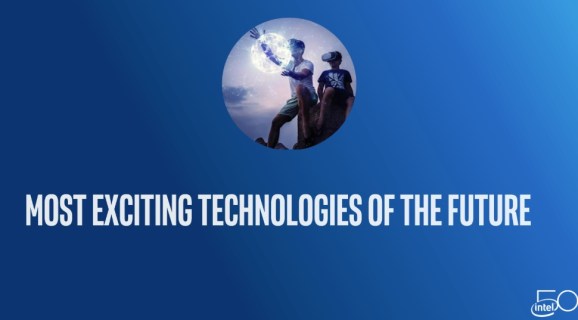 Intel did a survey on the next 50 years.

Intel turned 50 years old this year, and the big PC chip maker has just released a study, dubbed Next 50, where it interviewed 1,000 consumers about their views of the next 50 years.

“Emerging technologies have the potential to transform many aspects of our everyday life,” said Genevieve Bell, director of the 3A Institute, a professor at the Australian National University, and a vice president and senior fellow at Intel, in a statement. “Studies like this remind us about the diversity of human experience. When we talk about the future of innovation, we’re talking about a range of ideas, technologies and attitudes that will impact our lives in important ways.”

Even as consumers anticipate new technologies, they remain most excited about those that are most familiar. The survey revealed that consumers expect to rely most on smartphones (87 percent) in the future. Consumers also ranked PCs (84 percent) and smart home technology (84 percent) among the most important technologies in the next 50 years. 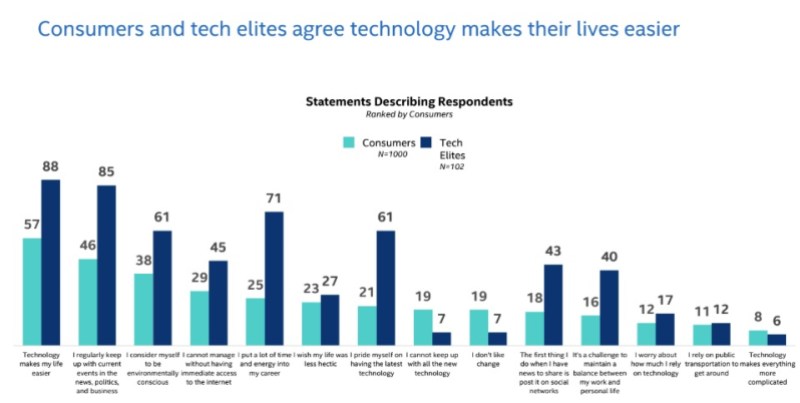 Above: The view of tech is rosy for the next 50 years.

“It’s hard to fathom going a day without using a computer or a smartphone, both of which will undoubtedly continue to evolve along with other technologies,” said Bell. “But newer, emerging technologies like AI and 5G are abstract, and harder to grasp, likely leading to anxiety around what they may bring.”

Among emerging technologies, consumers reported being the most excited about those with the potential to improve health, including genomic medicine (39 percent) and artificial materials for organ or tissue transplants (26 percent), as well as renewable energy (36 percent).

Artificial intelligence was especially highly rated by millennials and parents excited by its potential to assist them in their daily lives. Fifty-one percent of parents expect AI to increase their quality of life by enhancing and automating everyday tasks, compared to just 38 percent of respondents without kids.

However, many consumers don’t recognize the role AI already plays in their lives.

Despite the proliferation of voice assistants, predictive algorithms, and other common AI applications, more than one-third (36 percent) of consumers think they do not own any technologies that use AI.

While most consumers rely heavily on technology to stay in touch with friends and family (53 percent), many respondents reported that they fear people will develop an overdependence on technology and will spend less time interacting with each other (56 percent). They’re also worried about security and privacy.

Further, 37 percent of consumers and 38 percent of tech elites are concerned people may be isolated from one another when they use technology.

Despite these anxieties, consumers are still excited by emerging technologies that could help bring people together and create more time for connections, such as 5G networks and smart home technology.

A significant 61 percent of consumers are somewhat or very excited about the potential of speedy 5G communications. Millennials in particular are more optimistic about the future of 5G, with 45 percent saying it will bring people closer together by helping them to always be connected, as opposed to 35 percent for those aged 35 and older.

Above: Many think we’ll become too dependent on technology and ignore each other.

Today, only 18 percent of consumers heavily use technology to manage their homes, but 69 percent expect to do so within 50 years.

“The possibilities of technology are boundless, but there’s also a clear responsibility for those creating and developing such innovations,” said Bell. “Here at Intel, we’re fully committed to the next 50 years and beyond of bringing responsible, life-changing technology to people around the world.”

PSB conducted research on behalf of Intel. It did an online quantitative study from May 9 to May 20, 2018 among the U.S. general public.  All technology elites were ages 25 years or older with at least a college education, a household income of at least $100,000, and followed technology closely. The margin of error for the general public total sample is +/- 2.53 percent.