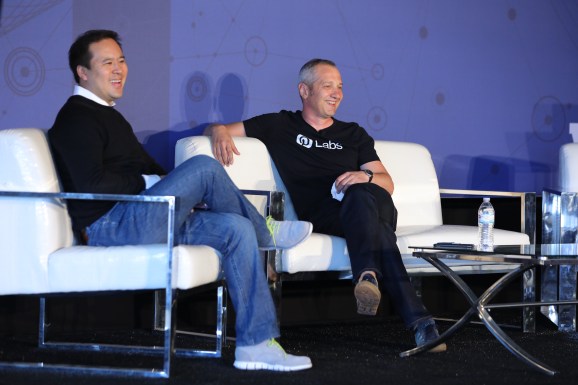 Yet another influential player in the space is Pinterest. The social bookmarking tool, which boasts more than 200 million monthly active users, leans heavily on computer vision and natural language processing to “get people to do things in the real world,” in the words of chief technology officer Vanja Josifovski.

“We don’t see ourselves as a social networking engine. There isn’t a part of the company where we don’t use AI,” he said onstage at VentureBeat’s Transform 2018 summit.

One example is Pinterest’s Lens feature, which performs pattern recognition to pick apart the content of pins — the posts that populate Pinterest users’ profiles — and recommend like content. If you snap a picture of a dining room table, for example, you might get a list of room decor ideas, or buyable pins for candles and rugs in-frame. (Lens powers Samsung’s object-detecting Bixby Vision tool on the Galaxy S8, Galaxy S9, and Galaxy Note 9.)

Shop the Look, another AI-powered Pinterest tool, uses object recognition to detect and search for items in photos, surfacing recommendations from partners that include Curalate, Olapic, Project September, Refinery 29, ShopStyle, and retailers like CB2, Macy’s, Target, Neiman, and Wayfair.

That is just the beginning, however. Josifovski said future Pinterest products might tap AI to understand and collate interests that “are difficult to put into words,” like personal tastes and style.

“I think this type of area is where we’re going to build something that’s very personal, and that’s going to communicate with people in a way that’s even hard for friends to talk about,” he said.

Driving the algorithms that underlie those tools is data — lots of data. To date, Pinterest users have pinned more than 100 billion images and organized them into 3 billion collections — or boards, in Pinterest’s parlance.

“We’re truly a big data company — our scale is just tremendous,” Josifovski said. “Each [pin] is basically an image and text. People curate this content into boards, and those boards reflect very fine refinement of people’s tastes. We have 3 billion descriptions of things people like together.”

“Bias [is] really hard to take out,” Josifovski said. “So many other parameters are correlated to the bias feature that it’s almost impossible to cleanse your model of any influence.”

Pinterest, it’s worth noting, is far from the only company wrestling with the problem of prejudicial algorithms. Other high-profile examples include Amazon, Northpointe, and Microsoft.

On the user privacy front, Josifovski said solutions are likely to spring up from political, not technological, innovations.

“On privacy, I don’t know if there’s a technical solution for it … As a company, you need to have a clear policy of what you want and don’t want to do with users’ data,” he said.

Despite AI’s roadblocks, Josifovski is convinced it’ll follow the adoption curve of home PCs: Before long, the tools to build it will become ubiquitous.

“AI is going to be available in everybody’s palm … You can be a small shop owner and be able to use it. You can go online and pick it up,” he said. “The democratization of AI is a bigger factor in driving anything.”