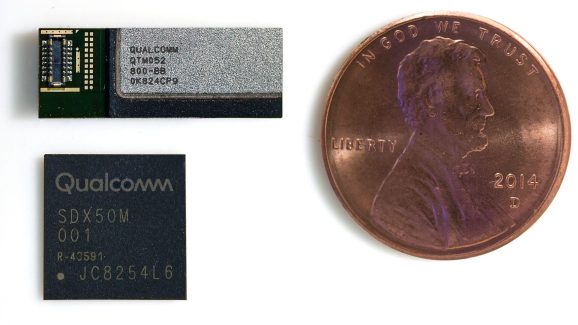 In an unusually ambiguous announcement today, Qualcomm says that it has developed a next-generation “flagship mobile platform” for 5G phones, combining its Snapdragon X50 modem with an unnamed 7-nanometer system-on-chip solution. Qualcomm expects that this new platform will appear in “premium tier” smartphones “in the first half of 2019,” leaving open the possibility that mobile hotspots promised for the “end of 2018” may use a different chipset.

While Qualcomm has left the name and other details of the new 5G platform ambiguous, rumors of an unannounced Snapdragon 865 have been circulating over the summer, notably including claims that Qualcomm might have decided to leave 5G out of the Snapdragon 855 for reasons unknown. On the other hand, a Lenovo executive said at the beginning of August that the company would be using the Snapdragon 855 in the “world’s first 5G mobile phone.”

Reading between the lines, the language of Qualcomm’s brief announcement appears to suggest that while the Snapdragon 855 will be used in the earliest 5G hotspots, 5G smartphones will instead adopt the unnamed platform. If that’s the case, it’s likely that engineering considerations — potentially power drain, heat, and/or wireless performance — pushed Qualcomm and most of its customers to prefer the newer platform.

Motorola’s upcoming 5G Moto Mod accessory has been announced with two separate Qualcomm modems — one 5G, one 4G — and its own spare battery pack inside, in addition to all the hardware inside the Moto Z3 it depends upon. As flagship smartphones tend to be thin and light, the chipmaker has likely been working to reduce the footprints and energy needs of its components so that they fit inside smaller devices.

Qualcomm says that the unnamed platform is now sampling to customers. It expects the platform to “enable premium connected devices that bring intuitive new experiences and interactions with power-efficient on-device AI, superior battery life, and performance” across multiple applications.

“We are very pleased to be working with OEMs, operators, infrastructure vendors, and standards bodies across the world,” said Qualcomm president Cristiano Amon, “and are on track to help launch the first 5G mobile hotspots by the end of 2018, and smartphones using our next-generation mobile platform in the first half of 2019.”

Full details of the new platform will be announced in the fourth quarter of 2018. Qualcomm has previously unveiled the 5G-capable Snapdragon X50 modem and 5G-ready antenna modules destined for early 5G devices, with plans to supply both to dozens of partners across the globe. The Snapdragon X50 promises to deliver up to 5-Gigabit-per-second data speeds and 1-2 millisecond latency, improving radically upon 4G modems used in current-generation smartphones and devices.