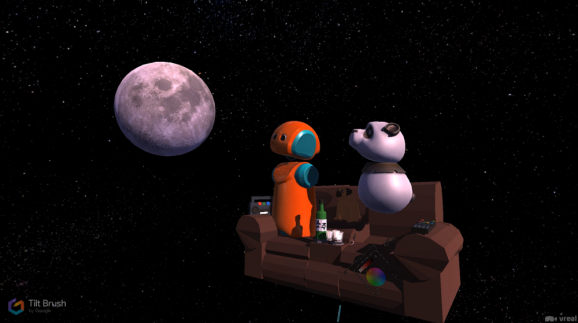 When the moon hits your eye like a big ... panda bear?

Vreal’s recorder maps player movements to an animal avatar while also capturing the entire changing virtual environment. With something like Tilt Brush, that means for the first time folks can actually record an entire experience from start to finish and then revisit it all later.

Apps like Altspace helped pioneer a similar type of capture, while Mindshow uses a similar premise to enable sharing of performances that build up over time. Adding Vreal to creativity apps like Blocks and Tilt Brush, though, gives creators who are already using those apps the opportunity to share the entire creation process with others.

To be clear, Vreal is not like OBS or mixed reality video capture. Vreal records the entire virtual environment in a linear way with voices and body movements mapped onto avatars. It’s a VR replay you can revisit later alone, with friends or with anyone.

Vreal CEO Todd Hooper said he is hoping to work with a number of top tier apps (Beat Saber is on the list of apps they’d like to support) to find out what people want to capture or stream. The service is still pretty bare bones at the moment, but a tool like Vreal holds the potential for creators to use a variety of virtual environments as the jumping off point for other types of content. Tilt Brush tutorials, for example, might be much easier to grasp if you are looking over the shoulder of the artist as they make their artwork.

Here’s a sample capture from Vreal minus audio that shows the basic idea:

Check out Vreal now on Steam with titles supported including Tilt Brush, Blocks and Gorn.

One note, though, is that a “known issue” listed with the latest update warns that “during Early Access, we can’t guarantee that recordings you make now will be available in the long term, due to the need to regularly update the platform with new features and titles. We’ll let everyone know in advance (likely through a post here on our Steam community hub) when older recordings will need to be unpublished from the app.”