Amazon hit a notable milestone today as its stock reached $2,000 per share.

The magic number was met just fleetingly, with shares reaching a high of $2,009.67 after Nasdaq trading opened this morning before dropping to just below the $2,000 mark once again. At the time of writing, Amazon’s shares have once again risen above the $2,000 threshold. 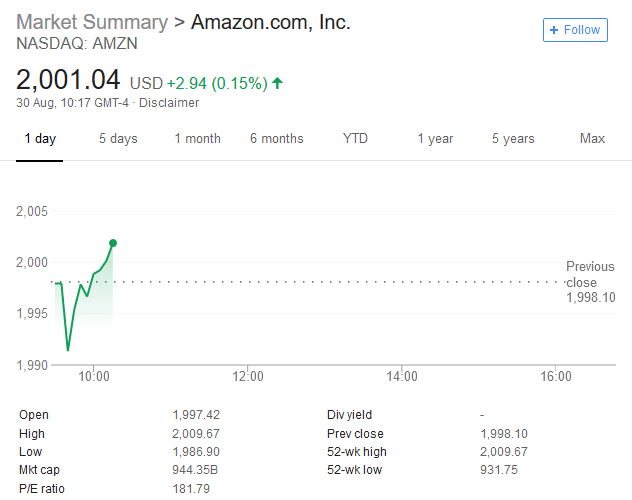 Above: Amazon shares hit $2,000 for the first time

The news also brings Amazon a fraction closer to joining the exclusive trillion-dollar club. Apple became the first U.S. company to hit the $1 trillion market cap earlier this month and is only the second company globally to reach such heights.

Debate had raged for months over whether Amazon would perhaps beat Apple to become the first U.S. company to hit $1 trillion, and although Apple ultimately prevaled, Amazon is now roughly $50 a share — 2.5 percent — away from becoming a trillion-dollar company itself. For context, Amazon’s shares have nearly tripled in the past two years and have doubled over the past 12 months alone. At this rate, Amazon should be there in no time at all.