Smart speakers are an emerging theme at IFA 2018. Bose threw its offering into the ring (the Bose Home Speaker 500) early on, followed by Bang & Olufsen (the BeoSound 1 and 2) and Sony (the HT-FZ9). Now Anker, the Chinese startup best known for its smartphone-charging accessories, is joining the fray. Today Anker took the wraps off the Soundcore Flare S+, a portable Bluetooth speaker with Alexa support, alongside a new robot vacuum cleaner from its Eufy subbrand.

The Soundcore Flare S+ isn’t new, per say — it’s an upgraded version of Anker’s Soundcore Flare, which launched in May. But the 360-degree speaker has improvements where they count, such as to the battery, which lasts 16 hours and can charge other devices via USB. Like other speakers that lean on Alexa Voice Services for voice control, the Soundcore Flare S+ can set timers, record reminders, and provide one-tap access to more than 45,000 apps.

“Our Flare Series has been an incredibly popular product for people looking to add ambiance to their social spaces,” Soundcore brand director Christie Chen said in a statement. “The most consistent request we’ve received for Flare has been to add a smart assistant.”

One of Soundcore Flare’s signature features was a multicolor LED light ring, and the Flare+ doesn’t disappoint on that front — its colorful ring glows in blue and cyan when Alexa’s invoked. As for the inside, it’s packed with “back-to-back full range drivers,” full tweeters, “thumping bass” radiators, a feature called BassUp that minimizes distortion, and a wireless chip that can sync up with another Soundcore unit to deliver stereo sound.

The Soundcore Flare+ starts at $129 and will be available this holiday season. 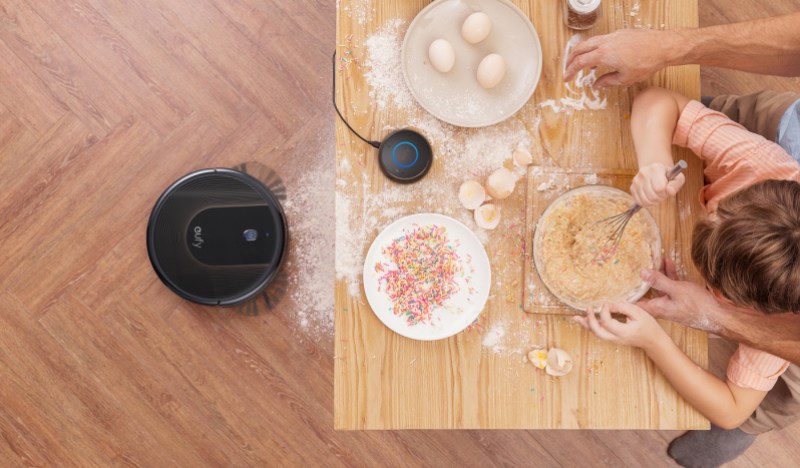 The Flare S+ wasn’t the only Alexa-powered device announced at Anker’s press conference. The company had a new robot vacuum cleaner in tow: the Eufy RoboVac 30C. It’s the successor to the RoboVac 11c and boasts up to 1500 pa (pascals) of dirt-sucking power; the second generation of Anker’s BoostIQ technology, which automatically increases the suction power as needed; and compatibility with Alexa and the Google Assistant.

It’ll start at about $299 when it goes on sale in October.