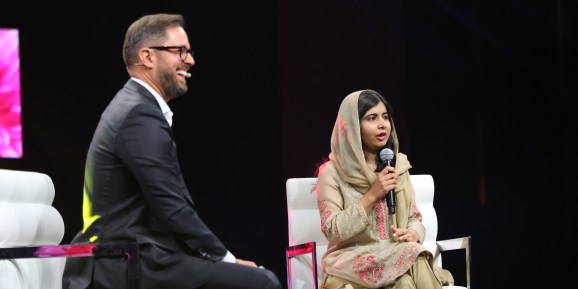 Malala Yousafzai, Pakistani activist for female schooling and the youngest Nobel Prize laureate, spoke today about the role of technology in helping spread education, the importance of raising awareness for the various injustices in the world, and the inspiration she draws from magic.

Malala made a wide variety of comments onstage at Pluralsight Live in Salt Lake City, Utah, but the ones about technology stood out to us. The conversation veered from sharing personal anecdotes with Pluralsight CEO Aaron Skonnard to cracking jokes at every opportunity, much to the audience’s delight.

Last month, the Malala Fund launched Assembly, a digital publication written by girls, for girls, seeking to educate and inspire the next generation of female leaders. Malala, who herself was only 11 when she started blogging under the pen name Gul Makai, said she is now inspired by the amazing stories girls tell her.

“We’re hearing these powerful and inspiring stories from girls, not just the difficulties they go through, but how they overcome that,” Malala said. “Always when I meet these girls, when I visit these girls, it is their stories that actually push me to continue the campaign that I’m running. And these are the stories that inspire me and should inspire all of you because these girls are fighting each and every day for their right to education, for their right to quality education, because they know that their future is in their school.”

The hope is that Assembly can elevate these stories so they get the attention they deserve, something that the internet is particularly good at enabling. Imagine if Malala never had access to an open platform to share her story. She began blogging at “a really cruel time” — there were curfews, schools were banned, and people were executed every morning.

“You are in a war zone,” Malala described. “Imagining life there is just — I have lived through that, but when I look back, I say ‘how did we survive through that?’ I’m amazed by the courage of all those people who are going through wars and conflicts right now and are staying brave and strong, have also become refugees but are still not giving up and are hopeful. But technology plays a key role. This is a resource that we have got; now we need to explore how we can use it for the benefit of society. And in education, it can play a big role. We’ve already seen that.”

She pointed to Lebanon, where Tabshoura in a Box lets Syrian refugees connect up to 30 devices even when there is no electricity. The government is now exploring how to leverage Tabshoura across the country, Malala said.

“It would be amazing if you could share your skills, your talents, your technology, the resources that you have,” Malala explicated. “It means a lot. Sometimes you may not realize, but one electronic device can play a huge role in a girl’s life — allowing her to have access to information. Many women are not aware that they deserve equality. That it is their right to get education. That it is their right to be paid equally. That it is their right to be treated equally. They just are not aware. That’s just how they are brought up. They are told they are not equal. They are told ‘you don’t deserve to be outside and working.’ And we need to change that. We need to tell women that they deserve equal rights. That there are people who are standing with them, that there are institutions that are there to protect their rights, and that they should speak out. So, raising awareness is crucial for that, and hopefully we can use technology and your support and all the resources that we have to raise that awareness and ensure that women are empowered and girls are getting their education.”

Skonnard then asked Malala about her desire, when she was younger, to become an inventor. And so the conversation shifted slightly to … magic.

“I used to believe in magic. I used to think if I could invent this machine that could demolish all the bad people from the world — not harm them (audience bursts out laughing) — just click this one button and the world just becomes good. Just click this button and there’s peace and there’s nobody standing there and stopping students from going to school. That was my dream.”

She explained she thought it was possible because of all the fairytales, TV dramas, and magic stories she consumed. She wanted a magic pencil, which she has written about, that let her draw anything and it would become real.

“But then I realized, maybe it was not working,” Malala explained. “I prayed for too long (more laughter). Then I finally realized the magic was in the pen, in the actual pen that I was using in school. The magic was in my voice. We all need to find that magic, which is not maybe in the magic pencil but in the pens and pencils we use every day. Voice can have that magic. Or art can have that magic. And that’s what we need to teach our kids: Find that magic and change the world.”

Then came the inevitable link between magic and technology; Malala noted that technology was magic to her father as he was simply not exposed to it, and then dove into how her generation takes it for granted.

“The world has changed a lot. For this generation, because they are seeing these things every day and it has just become so normal for us. Every year we want something new and we want updated versions of every technology. We are taking it for granted. But this is a blessing if we use it for the right purpose. … We need to appreciate it and think about how we can use it for all good, for people’s good, and for those people that don’t have access to many of the rights that we have.”

There were a few more tech-related tidbits from the interview. Malala touched on her first coding lesson at Apple’s headquarters: “It was good, it was really good. It became more challenging and harder, but I did not give up. I carried on.”

We use Facebook more for groups in our college. We have committees, we have societies, so Facebook is used a lot for that.

Some people call us the last generation to use Facebook. I don’t know why. They say the new generation is not on Facebook.

I felt really old when I heard that.

And I think Insta is more photos, so it’s more interesting.

But these things can waste a lot of your time, so be careful.

One final piece of advice?

“People often ask me ‘why did you start speaking out?’ I had only two options: To speak out or not. If I did not speak out, that means things were going to be worse. Nothing was going to change. I wanted to see change and this is why I decided to speak out. If you do want to see change, if you want this world to be a better place for all us, to be a healthier, wealthier, and safer place for everybody, then we have to do something. Always believe in the work you are doing. Sometimes we do not see the outcomes or the results soon, and we feel like it’s not actually worth it, but it is. Every small step that we take is changing the lives of many people.”