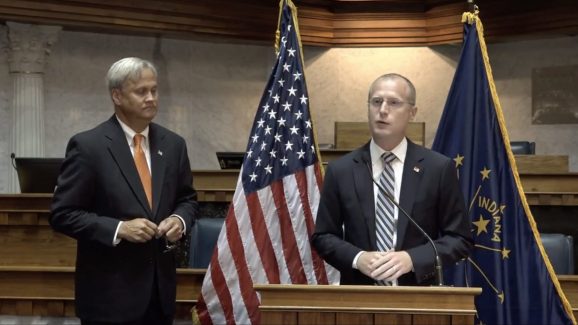 At a press conference today in Indianapolis, FCC Commissioner Brendan Carr announced that the commission will vote in three weeks on an order to speed 5G deployments across the United States, a plan based on bills already passed in many U.S. states. Carr was joined in the announcement by U.S. Congresswoman Susan Brooks, Senator Todd Young, and State Senator Jim Merritt, as well as Indiana business leaders.

Following recent announcements from the nation’s top two cellular carriers, Carr noted that Indianapolis is the first city to have 2018 5G deployment commitments from both Verizon and AT&T: “Indianapolis, not New York, not San Francisco, is number one in the country for most intensive 5G investment … that’s because of this state’s innovative leadership.” Saying that 5G speeds would be “perhaps 100 times faster than 4G,” Carr compared the 4G to 5G transition as similar to cars driving outside the capital versus those racing on the Indianapolis Speedway, while several speakers noted that 5G would enable self-driving vehicles and other technologies straight out of Jetsons cartoons.

To bring 5G to U.S. cities, upwards of 80 percent of deployments will be “small cells,” radio transmitters that are the size of backpacks and mounted on smaller poles, rather than larger cells on 200-foot towers. Carr noted that carriers are planning $275 billion in spending on American 5G infrastructure, notably without a penny of new taxes. However, rules that were created for 200-foot towers don’t always make sense for backpack-sized small cells.

The FCC reduced historic federal reviews earlier this year and has since been working to balance federal, state, and local approval concerns over 5G. Some states have moved faster than others: In Indiana, one year after enacting new laws to speed deployment, wireless providers have installed 1,000 small cells across 30 sites. Additionally, 20 states have now enacted small cell reform measures, but Carr said that there are still citizens in many states who are afraid of being left behind, and called on the FCC to suggest superior rules.

According to Carr, the FCC’s proposed order is designed to show respect for state legislatures and progressive localities. It doesn’t disturb the provisions of the 20 bills already passed, and it enables localities and states to charge small cell review fees.

However, excessive fees and review times can unduly slow down the deployment process, so the FCC is stepping in to provide guidelines to help communities and carriers move at an appropriate pace. The order includes four key points.

Carr said that the order will reaffirm local control over wireless decisions while ensuring that common sense guard rails apply to local conduct. The order’s text will be distributed to FCC commissioners for their consideration starting today, with a vote apparently taking place before the end of September.