Tor Project, the not-for-profit body behind the anonymizing Tor browser that lets you access the internet without being tracked, has launched the first official Tor mobile browser app.

Tor Browser for Android is available to install from Google Play now, or the .APK can be downloaded directly from the Tor Project website.

Tor, an acronym of “The Onion Router,” is known for its privacy-focused browser for Windows, Mac, and Linux that redirects traffic through a network of relays to prevent anyone snooping on users’ online activities. It is often used by whistleblowers and activists seeking to remain anonymous, while big companies such as Facebook have embraced Tor through the years to ensure everyone is able to access their service.

It’s worth noting here that there are other Tor-enabled browsers available for Android — Orfox is built from the same source code as the main Tor Browser (which itself is based on Firefox) and was developed by global open source software collective the Guardian Project, though it did come with the Tor Project’s official stamp of approval. But with Tor Browser now landing on Android, Orfox will be wound down in early 2019 when the official client is ready for prime time. The official Tor Android browser is still an alpha product for the time being. 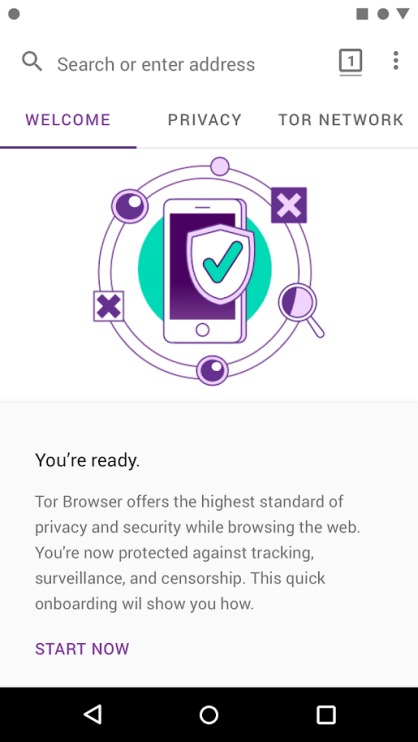 Above: Tor Browser for Android

In addition to being encrypted and anonymized, as you would expect from a Tor browser, the Android app features tracker-blocking tools that isolate each website you visit to stop advertisers from following you, while cookies are cleared automatically once your session is over.

For now, you will have to use the Tor Project’s official proxy app, Orbot, in conjunction with the Tor Browser Android app — however, plans are afoot to make the Tor Browser a self-contained entity that works without requiring a proxy to connect to the Tor network.

This launch comes just a few days after the main Tor Browser desktop client was updated with a bunch of new features, including improved language support, a new onboarding experience that better explains the benefits of Tor, and an easier way to bypass censorship via a “bridge” configuration.

The Tor Project had also been working on an encrypted messaging app since 2014, though this never graduated beyond beta and was wound down in April.

There has been a growing awareness of the value of privacy in the wake of frequent online chicanery, including the Facebook and Cambridge Analytica data privacy scandal. As a result, companies have been doubling down on their efforts to position themselves as privacy-focused — for example, Mozilla launched a Facebook Container add-on for Firefox to stop Facebook from tracking the rest of your online browsing activity, while the likes of ProtonMail have been continuing to build a range of privacy-focused apps, including email and VPNs.

Mobile web browsing surpassed desktop browsing a few years ago, and this trajectory will only continue — so it makes sense that the Tor Project is pushing its own official Android browser into the wild.

“Mobile browsing is on the rise around the world, and in some parts, it is commonly the only way people access the internet,” the organization said in a blog post. “In these same areas, there is often heavy surveillance and censorship online, so in the past year, we’ve focused on better supporting these users.”