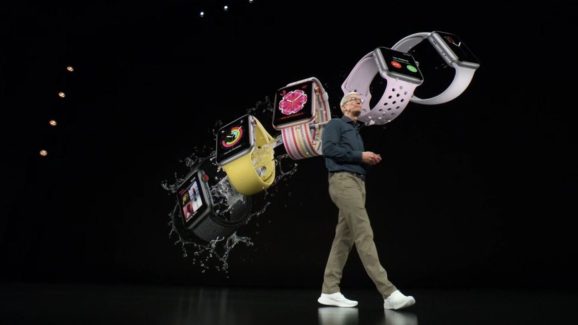 Here’s how the pricing breaks down:

Oh, and it launched the fourth generation of Apple Watch — the Apple Watch Series 4 in 40mm and 44mm sizes. Highlights include new health monitoring features such as an electrocardiogram reader, a powerful new S4 processor, and shiny new finishes. Those models cost $399; the LTE model starts at $499.

“Think about how much the Apple Watch has grown in such a short period of time,” Tim Cook said onstage. He boasted that it’s the top-selling smartwatch worldwide.

The Apple Watch Series 1 launched three years ago, in April 2015, alongside a MacBook refresh. (It debuted as the Apple Watch, picking up the “Series 1” moniker in 2016 after the launch of the Apple Watch Series 2.) Apple’s first wearable boasted a custom-designed, single-core S1 chip (but no GPS) and the company’s proprietary Taptic Engine, which uses a linear actuator motor to provide haptic feedback when alerts and notifications come in. Other highlights included a heart rate sensor and 8GB of internal storage.

According to analysts at Canalys, Apple shipped more than 12 million Apple Watches in 2015, constituting two-thirds of all smartwatch sales that year. (Samsung nabbed second place, thanks largely to the Gear S2 launch.)

That number seems quaint today. Analysts at IDC project smartwatch shipments will hit 124.9 million by the end of 2018, up 8.2 percent from the prior year. Moreover, according to MarketWatch, the market will be worth $35.7 billion by 2024.

The Apple Watch Series 1’s discontinuation comes days after San Jose chipmaker unveiled the Snapdragon Wear 3100, a wearables-bound system-on-chip that promises up to two days of battery life on a single charge.