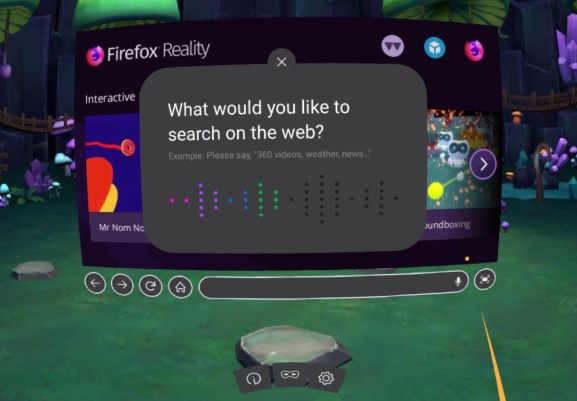 Mozilla announced back in April that it was developing Firefox Reality, a next-generation web browser specifically for standalone VR and AR devices, and now it’s actually here. Firefox Reality 1.0 is available today as a set of free downloads for HTC Viveport, Oculus Go, and Daydream headsets.

In addition to offering 2D and immersive web browsing capabilities, Firefox Reality has been redesigned with a VR-friendly user interface. Users will be particularly glad to find a couple of smart features designed to tackle a fundamental VR issue: text navigation in the absence of a physical keyboard. One of those alternatives is voice search, letting you use the microphone in your headset to avoid typing URLs into a keyboard.

Another alternative is a home screen that arrives pre-populated with a feed of VR-optimized content. Mozilla says that it’s “working with creators around the world” to offer VR games, videos, environments, and experiences in the feed. VR creators interested in getting featured in the Firefox Reality home screen feed can contact Mozilla here.

Under the hood, Firefox Reality uses the Quantum mobile browser engine, which already includes performance optimizations for standalone mobile device processors, as well as Mozilla’s standard security and privacy features. The browser includes a privacy mode, enabling users to enjoy web-based VR content without worrying about some of the ultra-granular tracking concerns that have recently popped up in the VR world.

Missing for the time being are bookmarks, which seem like must-haves for any browser a person will use regularly. Mozilla says they’re coming within months, along with support for 360-degree videos, separate user accounts, and other features; it expects to do regular updates to the browser, and maintain its typical level of engagement with the community.

You can download Firefox Reality for HTC Viveport, Oculus Go, and Google Daydream now. The company says that version 1.1 is “just around the corner,” and is open to discussing ports for other standalone VR, AR, and mixed reality platforms.