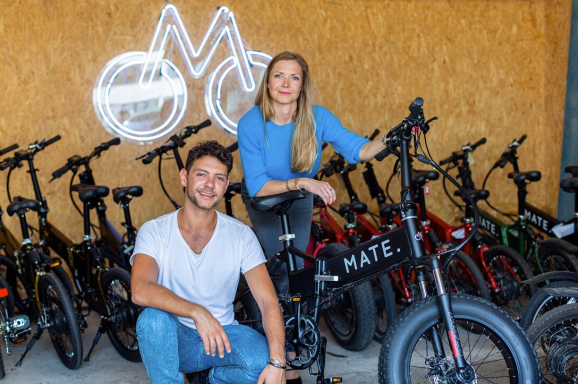 A phenomenon that’s been sweeping the globe lately is the rise of the electric bike. From docked and dockless rentals to owned vehicles, some of the most substantial recent success stories, acquisitions, and investments have been in this fast-growing marketplace.

The company behind Scandinavia’s largest-grossing crowdfunding campaign, Mate.Bike, has today hit a milestone with the most successful European ebike campaign ever for the Mate X, a foldable electric cycle.

Already backed by over $10 million, which is more than 20,000 percent of the company‘s original goal, the Mate X offers a sizeable improvement over the original Mate bike, which raised over $6.8 million in October 2016.

The need here is obvious. Car trips of less than a mile add up to about 10 billion miles per year, according to the 2009 U.S. National Household Transportation Survey (NHTS). According to the EPA, if the driving population of the U.S. chose to power half of these short trips with our feet instead of petroleum, we would collectively save about $575 million in fuel costs and approximately 2 million metric tons of CO2 emissions per year.

And while using electric bikes for these journeys does come at a cost — we still need to produce electricity to power them — the savings from both a monetary and ecological perspective are massive.

So what does the Mate X offer budding commuters, and how has it improved on the original model?

In addition to an electric bike that folds so you can carry it anywhere or take it with you on a train, plane, or in a car, the new model comes with a large LCD screen that informs riders of the remaining charge, as well as their speed. Backers of the Indiegogo project can upgrade to a color display if required.

As with the original Mate, a USB charger keeps your devices alive, and backers can customize their bike further by choosing puncture-resistant, fat tires from the Big Daddy option that allows for offroad adventures or something from the Sandstorm package for day-to-day city use.

Mate X comes with a 48V lithium-ion battery that offers assisted travel of up to 40-60 miles on a single charge. The bike comes in Subdued Matte Black, White Ice, Burnt Orange, and Matte Desert Storm, plus the company has decided to launch a special Unicorn edition coating — perfect for Silicon Valley employees with dreams of huge exits.

“If I could describe Mate X in one word, it would be ‘Xtreme!’,” cofounder and chief visionary officer Christian Adel Michael said. “After founding Mate.Bike, we saw the potential to take ebikes and cycling to the next level. It’s not just about bikes after all; this is about allowing people the freedom to live as extreme and as freely as possible.”

The team behind Mate are proud of their heritage and of the part bicycles have played in keeping their country mobile.

“In today’s fast-paced world, perhaps the rest of the world can learn from us Danes and enjoy the world from two wheels — after all, we are the happiest people on earth,” Adel Michael said.

“Coming from Copenhagen, we know biking makes a difference in our everyday life,” said cofounder and chief purpose officer Julie Kronstrøm. “Our dream is to get more people biking. We pride ourselves on delivering a practical and cool means of transportation that is healthy, affordable, and part of the solution to pollution problems and traffic congestion. There is no greater feeling than knowing not only are you helping the environment live healthily, but riders experience a healthier, freer way of life.”

More cost-effective than many other folding electric bike options, such as the GoCycle GS or the Enzo bike, the Mate X starts from $699 for early bird Indiegogo backers.