While wearing an Oculus Rift headset, users have the ability to sequence linear stories and create branching timelines. They can also add graphic overlays, interactive hotspots, and triggered actions to content, all within a VR environment that more closely approximates the finished experience than a flat computer monitor does.

“We are bringing to market the first complete set of cloud-based VR tools, with the capability of creating and editing in a virtual environment, making it easier than ever to build immersive VR experiences,” said Pixvana CEO Forest Key.

Stitching features will also be available on computers using Google’s Chrome browser, with rendering of 8K+ resolution masters notably taking place in the cloud — part of Pixvana’s move to offer an end-to-end cloud-based VR creation, editing, and distribution platform. The company says that cloud-based rendering will save people around half the time it would take using a desktop computer. 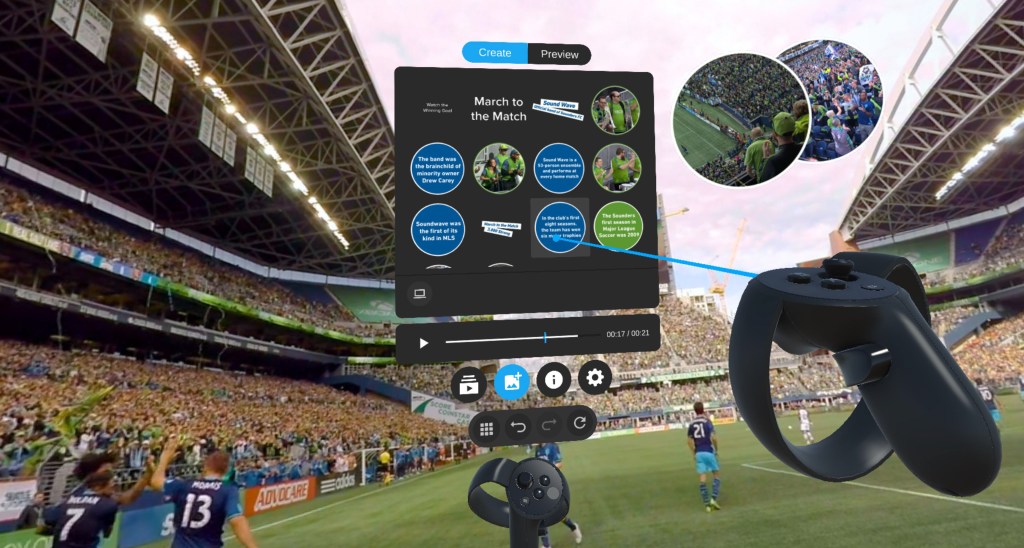 In total, Spin Studio now incorporates tools for VR video uploading, asset management, editing, stitching, and publishing. Users begin by sending video, audio, and photo content to the cloud, where it can get VR-display optimized, sequenced, and shared to YouTube or Steam. To test content, samples can be distributed more narrowly to anywhere from one headset to dozens using a private “pair-and-share” VR casting feature. Completed files are compatible with Oculus Go and Rift, Samsung Gear VR, Google Daydream, and HTC Vive headsets.

A free trial of the Spin Studio platform is available now, offering access to either use the service for 30 days or to create one project. Annual fees for the service range from $1,000 to $10,000 depending on usage, while educational institutions and certain non-profits can apply for free two-year licenses.