Uber has announced plans to roll out public charging stations for its dockless electric bikes, a move that constitutes part of a broader alignment with a “sustainable mobility” campaign.

Alongside this news, the company also today announced a new $10 million sustainable mobility fund, in addition to a partnership with SharedStreets to develop standards around how private transport companies such as Uber can share data.

“Just as personal car ownership had a fundamental impact on mobility in the last century, new forms of transportation are spurring another revolution — one that comes with its own set of challenges and opportunities,” Uber CEO Dara Khosrowshahi said. “Today, we’re at an inflection point: when the private and public sectors need to come together and collaborate on ways to create smarter, safer and more efficient ways of getting people from A to B.”

Back in April, Uber snapped up electric bike-sharing startup Jump in a deal reported to be worth $200 million. It signaled Uber’s long-term mission to provide urban transport options for all scenarios, where cars maybe aren’t the best option for getting from A to B. Jump’s dockless electric bikes, though pedal assisted, require charging, which has hitherto involved a team of people collecting the bikes and bringing them back to a depot for charging, which can take up to six hours.

This can be a difficult system to scale, which is why Uber is now rolling out charging stations for Jump bikes. To kick things off, Uber said that it’s starting with a “deep” partnership with Sacramento, where it will offer charging stations across the city at universities, government buildings, and public transit stations.

“We’re partnering closely with public entities including the Sacramento Regional Transit District, Sacramento Council of Governments and California State University, Sacramento, to make e-bikes a viable option for everyday use, whether that’s commuting to your job or getting to and from public transportation,” Khosrowshahi added. 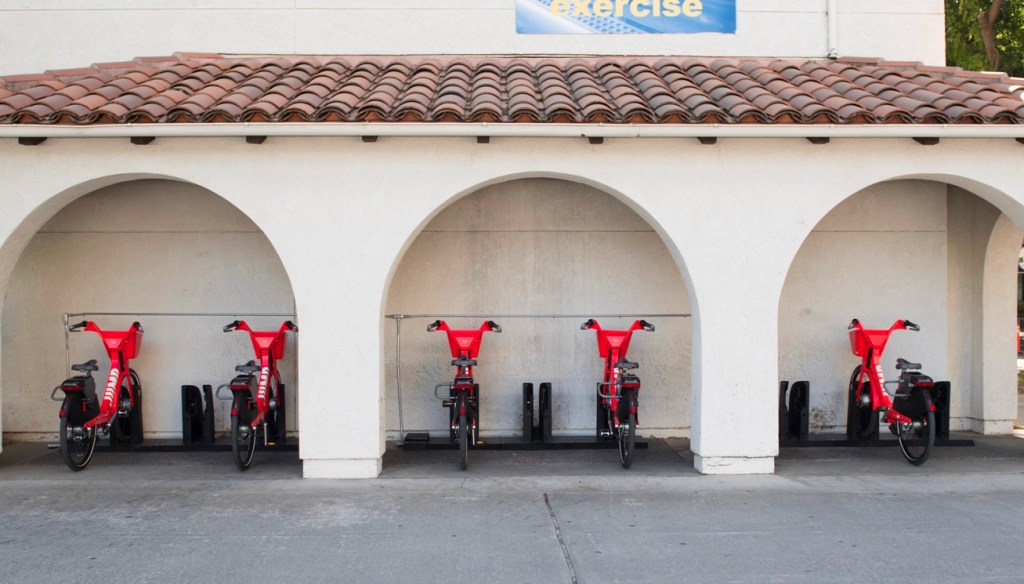 Though charging stations kind of go against the “dockless” principle, they are located where people are more inclined to leave their bike, so this should help encourage users to park it in one of the charging stations.

This does make sense. While many cities have seen a veritable explosion of dockless bicycles, which hasn’t always been greeted with open arms, electric bikes require more of an infrastructure to ensure they are constantly charged. And this is what Uber is investing in here with these charging stations. Though it is limited to one small region for now, Jump is continuing its expansion into new markets including Europe, so we can likely expect this initiative to land further afield too.

“Our acquisition of Jump was a direct investment in the idea that sometimes the best way to get around a city is not in a car at all,” Khosrowshahi continued. “We’re proud to say the early results of our investments in e-bikes are positive. Based on data in San Francisco, we found that on weekdays between 8am and 6pm — when congestion is at its worst — trips by Jump riders on the overall Uber platform climbed 15 percent, even as their Uber car trips declined 10 percent.”

Underpinning Uber’s investments in sustainable mobility is a new $10 million fund which Khosrowshahi said will be used to “campaign for ideas that put the long-term public interest over maintaining the mobility status quo.” This will involve adhering to the Shared Mobility Principles for Livable Cities, a set of standards developed by global NGOs that operate in the sustainable transportation sphere.

In particular, Khosrowshahi pointed to congestion pricing as one area where it will look to invest. Uber has already invested in lobbying efforts in New York to get congestion legislation passed, and Uber is adamant this should apply to all vehicles, not just for-hire vehicles which some early proposals targeted specifically.

“The funding generated [from a congestion levy] would directly support mass transit, a critical goal of our overall campaign,” Khosrowshahi said. “We recently committed an additional $1 million to fight for its passage [in New York] next year. This campaign signals our commitment to bringing similar support for sustainable transportation policy to cities around the world.”

From its fund, Uber has also earmarked an undisclosed amount to PeopleForBikes, an organization that works with governments and local authorities to progress bike laws and related funding initiatives around the U.S.

With that in mind, Uber also announced today that it is partnering with and donating $250,000 to SharedStreets, a not-for-profit organization created by National Association of City Transportation Officials (NACTO) and the World Bank-led Open Transport Partnership that is setting out to create new standards for how companies such as Uber can share their data to improve public roads.

Uber is available in hundreds of cities around the world, and it is the default ride-hailing app of choice to millions, placing it in something of a unique position to work with cities in many countries. And to start with, it said that it’s looking to provide road speed data to local authorities.

“Today, many cities lack detailed data on street speeds, a foundational data set for almost any transportation analysis,” Khosrowshahi noted. “As a company facilitating more than 15 million trips per day around the globe, we have a unique opportunity to make the wealth of data we collect available for use by the cities we operate in. That’s why we’re partnering with SharedStreets to build state-of-the-art standards for how private players can share road speed data.”

This means that in the coming months Uber will make its street level speed data available to the public for free.