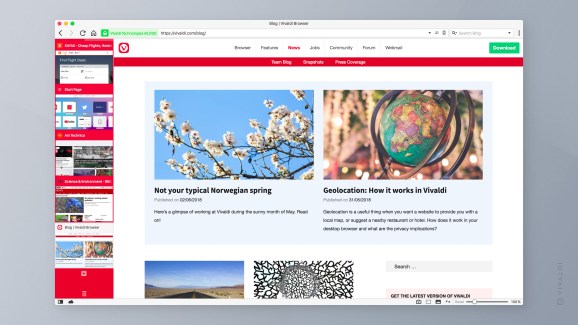 Vivaldi was founded by Jon von Tetzchner, a former CEO of Opera who oversaw that company’s browser development for years. Since leaving several years ago, he has seen leaner, simpler browsers leaving behind a larger group of users who wanted more.

That led to the launch of Vivaldi 1.0 in 2016. The first version offered features such as tab stacks to help manage large numbers of open tabs, the ability to view multiple pages at the same time using tiles, notes to let users save excerpts of pages, and web panels that could be viewed via a sidebar.

Since then, Vivaldi has been downloaded more than 1 million times. Yes, it’s puny compared to the more than 1 billion users Google’s Chrome browser boasts. But in some ways, that’s point: finding a narrower focus that’s better for a core group of users.

“What we’re gradually doing is polishing the browser,” von Tetzchner said. “We’re aiming for a richness in the browser that you don’t find anywhere else.”

Despite the long odds Vivaldi faces, the launch couldn’t have come at a better time. Just as version 1.0 was rolling out, concerns about privacy were exploding in the public sphere, with tech giants facing growing questions about their collection and handling of personal data. Indeed, that issue flared again this week amid revelations that the latest version of the Google Chrome browser would automatically log users in by default.

By contrast, Vivaldi gathers no personal information and places no cookies to track users on their computer. While such data offers a tempting way to monetize users, von Tetzchner insists Vivaldi will never go down that road. Over the past year, the company has also partnered with privacy-focused search engines Qwant and DuckDuckGo.

“Some of those business models we don’t want to be a part of,” he said. “There’s this debate about whether you should track users or no. We don’t do it, and we don’t think we should.”

Meanwhile, the company has continued to release a never-ending stream of updates and improvements. But the latest round was signficant enough that the team thought it time to officially apply the 2.0 label.

The most notable changes include:

“We have a massive amount of features we’re building on,” he said. “Every feature can be approved.”

Looking ahead, he said the big challenges in the coming months include developing a mobile version of the browser, as well as an email service.

The company currently has 42 employees, and it is mainly being bootstrapped by von Tetzchner. Revenue is coming in via the partnership deals. And while the company isn’t profitable yet, he’s optimistic that it is on the path to sustainability.

“It takes time to build a company like Vivaldi,” he said. “We’re not taking external investment. We’re not building something to be sold or to IPO. We want to build a fantastic browser and provide it to those who want it. And that’s how we’re building the company: to focus on the users.”