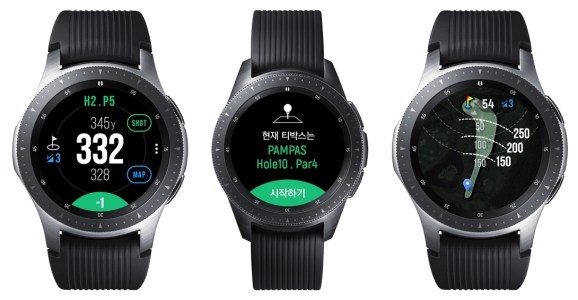 Catering to a very specific demographic, Samsung has announced the Galaxy Watch Golf Edition — a customized version of its latest smart watch that most notably features a golf app called Smart Caddie. As discovered by SamMobile, the new edition has thus far been announced for release in South Korea, where it will be marketed at a $45 premium over standard Galaxy Watch models.

Samsung’s vision with the Golf Edition is apparently to present the Galaxy Watch as a gift-worthy wearable with a niche but compelling activity tracking feature ready to go. Co-developed with Korean golf simulator company Golfzon, Smart Caddie leverages the Galaxy Watch’s sensors for shot tracking, and with the latest model’s battery life works for 54 holes or three full rounds of golf.

The app can also keep golf records, as well as sharing information about individual golf courses. It includes data on 60,000 courses from across the world, even diving into details such as the height of a given green. Apart from its name and app-specific functionality, the Golf Edition is otherwise apparently the same as a regular Galaxy Watch.

There’s precedent for the Galaxy Watch Golf Edition, as Samsung released a Gear S3 Golf Edition in October 2017 with similar functionality. In early October, Apple will begin to sell a Nike+ version of its competing Apple Watch Series 4 smartwatch with additional watch faces and a pre-installed Nike+ running app, targeted at runners.