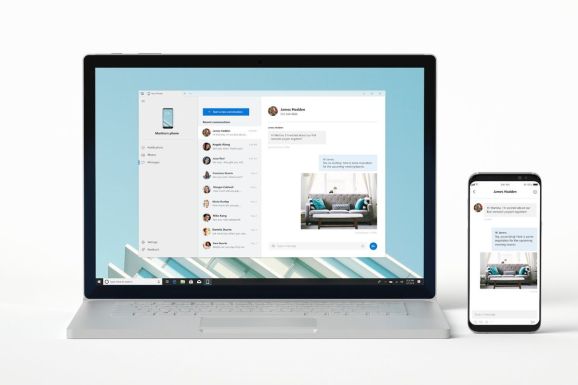 A refreshed Surface lineup (see: the Surface Studio 2, Surface Laptop 2, and Surface Pro 6) and Cortana-powered Surface Headphones weren’t all Microsoft announced at its event in New York City this evening. It also took the wraps off a new screen-mirroring feature within the Your Phone app for Android, plus Outlook To-Do integration and enhancements to the Microsoft Launcher.

The latest version of Your Phone, Microsoft’s companion app for mobile devices, works as promised: Recent photos, websites, and messages from your phone appear on your desktop. But there’s something new coming: screen mirroring. Basically, the feature will capture your smartphone’s display — notifications, foreground applications, and all — and stream it via Wi-Fi to any Windows 10 desktop in near-real time. App launching and switching are managed from a list on the target PC’s screen.

It appears to be an Android-only affair for now (you’ll need a phone running Android 7.0 or newer, specifically), and although Your Phone is shipping as part of the October 2018 Update, screen mirroring won’t be available right away.

It’s worth noting that Dell and HP offer apps (Mobile Connect and Phone Wise) that sync texts, phone calls, and notifications between phones and Windows 10 PCs. But neither solution supports screen mirroring.

Ranganathan walked through a demo video of users exchanging Snapchat messages using app mirroring, and another of a user dragging and dropping photos captured with a phone to a PowerPoint slide deck on a PC. It all looked pretty seamless.

Sometimes you can’t stop for a text. Now you don’t have to. Get Your Phone app and text right from your PC. Available now in the #Windows10 October 2018 Update. #MicrosoftEvent pic.twitter.com/JCXP3cJ3Zl

Separately, Outlook on the web is gaining tasks management in the form of Microsoft To-Do. It sits alongside the inbox and calendar (much like the Tasks in Gmail) and bidirectionally syncs with the To-Do app for Android and iOS.

And the Microsoft Launcher has been updated with one-swipe access to calendar events, To-Do list, and the Windows 10 Timeline. Now it integrates with apps like WhatsApp, and the Timeline displays documents, emails, and websites recently opened on your phone, in addition to those viewed or edited on desktop.

Microsoft says it will extend Windows Timeline support to iOS users in early November via an update to the Microsoft Edge browser.