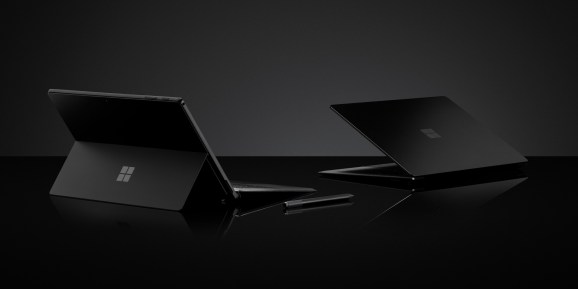 Both devices come with 8th-generation Intel Core processors (upgradeable all the way up to quad-core) and start at 128GB of SSD storage (upgradable to 1TB). The Surface Laptop 2 starts at 8GB of RAM (upgradeable to 16GB), while the Surface Pro 6 still comes with 4GB, 8GB, or 16GB of RAM.

Panos Panay, head of engineering for all of Microsoft’s devices, said the Surface Laptop 2 is 85 percent faster than the original Surface Laptop. He also mentioned that the screen features more than 3.4 million pixels, a 1,500:1 contrast ratio, and happens to be the “thinnest ever LCD” for a touchscreen panel.

Leave your charger behind. The new #SurfaceLaptop2 is the stylish way to work and play on one charge. #MicrosoftEvent pic.twitter.com/FEg6jVoUIO

Panay said the Surface Pro 6 is 67 percent more powerful than its predecessor (which oddly enough was just called Surface Pro). Surface Pro 6 still gets 13.5 hours of battery life, weighs 1.7 pounds, and has a 267ppi screen with “the highest contrast ratio” Microsoft has ever delivered.

Announcing the all-new #SurfacePro6 — faster than ever with the latest 8th Generation Intel® Core™ processor. Now in Black and Platinum. #MicrosoftEvent pic.twitter.com/NyIJhzhsgn

Unlike last year’s Surface Book 2 and this year’s Surface Go, the company is not adding a USB-C port to the Surface Laptop nor Surface Pro. This is an odd choice, given that Surface fans have asked for USB-C ports and Microsoft has been slowly delivering.

That said, this year’s Surface Laptop and Surface Pro do come with an obvious change: a black color option. That tidbit leaked over the weekend via a Microsoft New Zealand event invite titled “Microsoft Surface Back to Black” — a reference to the fact that the original Surface, Surface Pro, and Surface Pro 2 had a semi-glossy black finish that Microsoft calls “dark titanium.” Infamous Microsoft leaker Walking Cat confirmed the black look with an image earlier today.

The black option is just that: an option. You can still buy the new Surfaces in other colors.

The Surface Pro 6 is going back to its roots with the black option, but it will still be available in silver, or as Microsoft calls it, Platinum.