In the years since the first Chromecast hit store shelves in 2013, Google’s $35 plug-in streaming dongle has come to dominate the set-top landscape. The more than 55 million units sold globally have handled in excess of 1.5 billion stream requests from tens of thousands of apps, according to Google. And the Mountain View company, intent on keeping a good thing going, introduced a third-generation model in a blog post.

The new Chromecast replaces the SKU launched in September 2015, but you wouldn’t necessarily know that from looking at it. It retains the puck-like, circular design of its predecessor, with a flexible HDMI cable hanging off the top of the enclosure. Also left untouched is the microUSB port that supplies power; folks hoping for a USB Type-C upgrade won’t find it here.

That’s not to suggest there aren’t changes, though, and universally for the better. The third-gen Chromecast has a matte finish that’s easier to grip and an upgraded Wi-Fi antenna design with faster 5GHz performance. In FCC filings earlier this year, Google said it has a maximum antenna gain of 4dBi compared to the outgoing Chromecast’s 2.1dBi, a roughly 50 percent improvement.

It’s also 15 percent faster thanks to unspecified hardware improvements, and can support video up to 1080p at 60 frames per second.

Another spotlight feature is Bluetooth connectivity, which theoretically lays the groundwork for remote control and game controller support. Details were hard to come by at publication time — when asked for clarification, a Google product manager told VentureBeat Chromecast has “always had Bluetooth” — but we’ll update this post as we learn more. 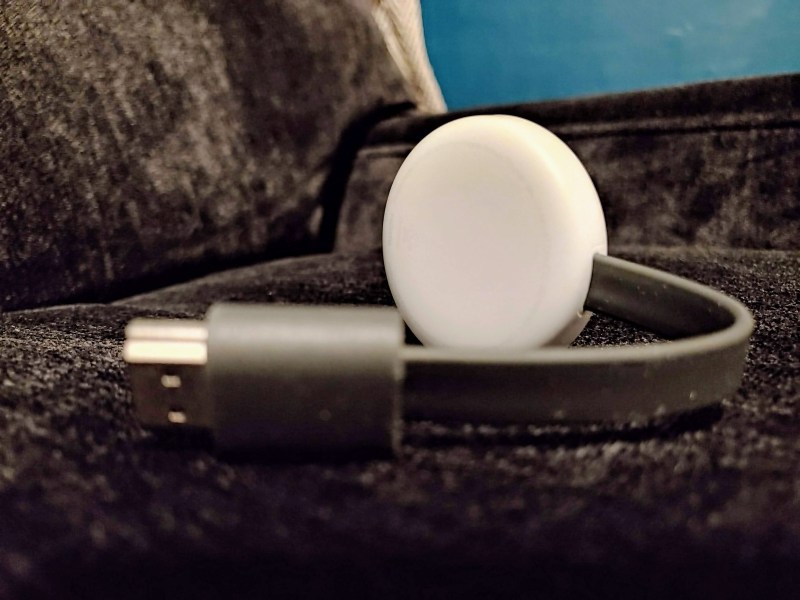 The new Chromecast is available in stores starting today starting at $35, and comes in two colors: Chalk and Charcoal. It’s shipping in Australia, Canada, Denmark, Finland, Great Britain, Japan, Netherlands, New Zealand, Norway, Singapore, Sweden, and the U.S. to start, with even more countries to follow in 2019.

Sadly absent from today’s announcements was news of Chromecast Ultra, a premium $70 Chromecast variant that supports 4K resolution and high dynamic range (HDR) formats, including HDR10 (but not the recently introduced HDR+) and Dolby Vision. Chromecast Audio, a $35 audio-only model that plugs into the 3.5mm audio jack of any speaker and enables high-resolution (24-bit/96 kHz) multiroom audio, also escaped mention.

In 2015, a Strategy Analytics report pegged Chromecast’s share of the global digital media streamer market at 35 percent, ahead of devices from Apple, Google, Amazon, and Roku, but a recent survey found a year-over-year dip in Chromecast usage. With today’s updates — plus the new Smart TV Kit bundle — Google’s angling to retake the lead.

Chromecast, for the uninitiated, taps a proprietary protocol — Google Cast — that streams content in one of two ways: through Cast-enabled apps, which beam TV show, movie, and video web links to a browserlike environment running on Chromecast, or mirrored from a tab within Google Chrome on a mobile phone or computer. Chromecast devices lack an infrared emitter and so can’t control every television with a remote control. But those supporting Consumer Electronics Control (CEC) automatically turn on and switch to the active HDMI input.

The video playback experience on Chromecast has improved dramatically over the years, with autoplay and content-queuing hitting the platform in 2015. Last year, Chrome gained an experimental feature that forwards bitstreams directly to Chromecast when a video is being played on the source device in full screen, improving the streaming quality of apps and websites that don’t natively support Google Cast.

May 2015 saw the introduction of new gaming-focused APIs, like Cast Remote Display, which allows developers to create second-screen experiences, and Game Manager, which offers greater control over multiplayer experiences. Much more recently, code changes in Chromium — the open source project on which the Chrome browser is built — suggest tap gestures are on the way.

That’s just the tip of the iceberg. Chromecast devices can mirror playback from Google’s $99 Daydream View headset, stream presentations from Google Slides, and cycle through pics from Google Photos. And they play nicely with the Google Assistant and Google Home, Google’s AI-powered voice platform and smart speaker lineup, respectively.

You can queue up previously purchased or rented movies on Chromecast with a voice command and pull up your calendar, local weather, and more. (The results are personalized to you: Google’s Voice Match tech enables different content to be shown according to which voice it detects.) Chromecast and Google Home recently gained tighter integration with YouTube Live, Google’s $35-per-month TV subscription service, allowing subscribers to not only channel surf with voice commands, but also pause, rewind, and play back content. And earlier this year, Google rolled out the ability to beam security camera feeds from Logitech’s Circle, Nest’s Nest Cam IQ, and other devices to Chromecast with a voice command.