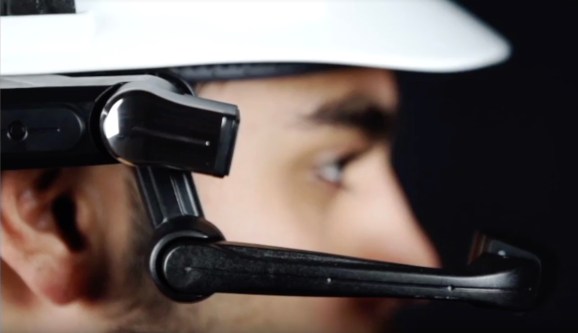 Designed to offer hands-on workers the ability to access a virtual 7-inch tablet that sits just below their line of sight, the HMT-1 features a micro display that is visible even outdoors, and the headset is ruggedized to MIL-STD-810G levels — two-meter drop resistant, capable of operating in temperatures ranging from -20 to 50° Celsius, and IP66-certified for water and dust protection. A swappable battery provides 9-10 hours of typical use for an eight-core Snapdragon 625, 16MP image-stabilized camera, four noise-cancelling mics, and wireless chips, including GPS, Wi-Fi 5, and Bluetooth 4.1 LE support.

The manufacturer’s decision to bring the headset to hundreds of its mechanics and engineers is significant — but only a first step. “Colgate-Palmolive’s global deployment signifies that industrial wearable computing has crossed the chasm into mainstream manufacturing companies,” said RealWear CEO Andy Lowery.

Initially, the company will use the headsets for several plant floor-specific applications: hands-free machine troubleshooting, voice communications for support and training, plus creating and retrieving videos and documents.  “Looking ahead,” said global engineering VP Warren Pruitt, “we see an opportunity to use this tool beyond the plant floor for improved performance and new efficiencies.”

RealWear also offers an “intrinsically safe” version of the HMT-1 — called the HMT-1Z1 — billed as the “only head-mounted computer on the planet approved for ATEX & IECEx Zone 1 and CSA C1-D1” hazardous sites. The ruggedization found in both models gives them an advantage over early wearables, such as Google Glass, which were questionably targeted at average consumers — and compromised as a result.