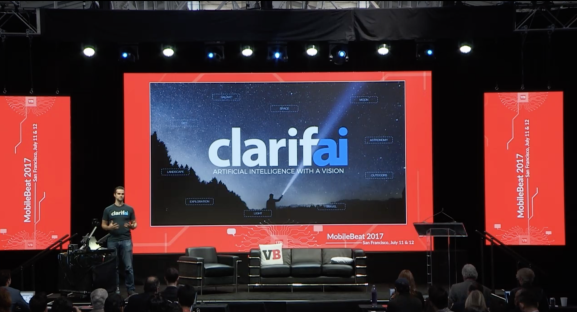 Filtering out pornography, drugs, gore, and other objectionable content on the internet is no easy chore. Facebook now has 7,500 content moderators around the world, up from 4,500 in May of 2017. And in April, Google-owned YouTube said that it took down more than 8 million videos that ran afoul of its policies in the three months to December 2017 — 20 percent of which were identified by a team of thousands of employees.

New York City startup Clarifai thinks it can lighten the load with the help of artificial intelligence (AI). It today announced an end-to-end moderation solution that taps computer vision to parse the content of user-generated photos and videos, and, when it detects something offensive or objectionable, flag them appropriately. It launches this week in public beta.

“At Clarifai, we are committed to continually improving AI to benefit humanity, and the tools we have built for our new end-to-end solution for moderation answers a pressing market need from our customers,” Matt Zeiler, Clarifai founder and CEO, said. “Content moderation is critical to protecting everyday consumers from unsavory and unwanted content while browsing their favorite social platforms”

Clarifai’s moderation solution, which leverages the company’s existing machine learning models, compares user-generated content with a list of preconfigured filters such as “explicit,” “suggestive,” “gore,” “drugs,” “NSFW,” “SFW,” and custom concepts. Customers first send their images fo Clarifai to help visualize how the system analyzes their data. For each piece of content analyzed, a probability score indicating the likelihood of a match is generated.

Applying AI to content moderation isn’t a new idea. Microsoft’s Azure has Content Moderator, an autonomous moderation service that blends AI and human review to detect potentially offensive images, text, and videos. Alibaba Cloud has a comparable offering in Content Moderation, which uses deep learning to look for violence, terrorism, and spam in user-generated pics and videos, as does Amazon in its AI-powered object detection service Rekognition.

In production, those systems have proven to be far from foolproof. Facebook’s algorithms, for example, have tagged pictures of historic statues sexually explicit, and automatically removed iconic Vietnam War photos. And YouTube has accidentally flagged legitimate adertisements as spam.

A web dashboard provides controls that allow users to automate content approval and denial, and integrated support for human moderators in the event that content doesn’t reach a specified confidence threshold. It’s very much a “humans in the loop” approach, according to Zeiler — Moderator UI taps teams to validate the model’s accuracy, and each piece of content that’s reviewed and tagged is used to retrain the system to continually improve its accuracy.

“Customers can focus their money and resources where it counts: on scaling their businesses,” he said.

Alongside the moderation solution, Clarifai announced an enhanced General Model, and made publicly available its Moderation, Celebrity, Face Detection, Textures & Patterns, General Embedding, and Faceb Embedding systems. It says they offer up to 99 percent accuracy on image and video recognition.

General Model — Clarifai’s oldest product — is capable of recognizing up to 11,000 objects, plus things like moods and themes. An upgrade in early October to version 1.5 brought with it improved accuracy, enabled in part by training data that’d been machine-labeled instead of human-labeled.

“It also will help people be able to build custom models on our platform and do visual searches better on our platform because the General Model is kind of the underpinnings of all that technology, and so this really isn’t just prebuilt concepts that’s off the shelf and ready to go, but it also improves the accuracy of those other tools that we have on our platform,” Zeiler told VentureBeat in a phone interview earlier this year.

Clarifai, which was founded in 2013, counts West Elm, OpenTable, Trivago, and 9Gag among its clients. Its services classify and predict more than three billion concepts in photos and videos every month.

To date, Clarifai has raised more than $40 million.