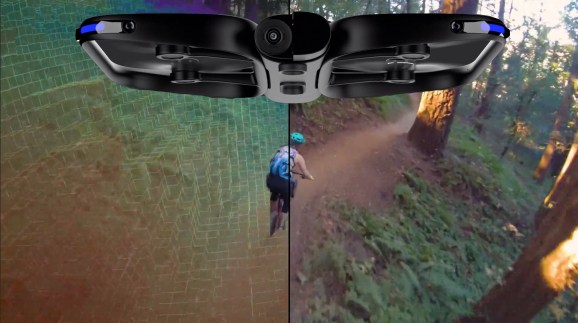 Three years ago, a startup named Skydio emerged from stealth mode to reveal its AI platform for autonomous drones — sophisticated software that could let a drone user “be a cinematographer, not a pilot.” It took until earlier this year for Skydio to actually release R1, its first drone with the feature, at an eye-watering price of $2,499. Now the company is offering R1 for $500 less, alongside a novel new feature: Apple Watch control.

Powered by Nvidia’s Jetson AI hardware, R1 pairs 13 cameras with an “Autonomy Engine” that sees, maps, and understands an environment in real time, navigating itself in the airspace around a moving or stationary user with minimal guidance. The concept is to give the drone enough intelligence to automatically follow and record a person who’s running, riding a bike, or enjoying some other outdoor activity without the need for constant user flight control. Instead of running into a tree trunk, R1 will fly around it; though its performance apparently isn’t as strong when navigating thin branches.

R1 originally required a smartphone for all of its control functionality, including launching into the air, capturing HD footage, and landing. The new Apple Watch app doesn’t fully eliminate the need for a phone, but rather reduces it. Once R1 is aloft, you can use the Watch to change autonomous flight modes, rotate the drone, and end flights, as well as choosing the person R1 is tracking. Skydio also offers access to current R1 status, including battery life and alerts, directly through the Watch.

Like apps from most Apple Watch developers, Skydio’s appears to have been limited as much by Apple’s prior-generation screens and chips as by questionable user demand for Apple Watch software. Sluggish and smaller-screened early models created a vicious cycle whereby app developers would spend valuable time working on so-so apps, only to have most users ignore them. But the latest Apple Watches are dramatically faster and include larger displays, changes that will hopefully encourage developers like Skydio to bring even more capability to users’ wrists.

Skydio version 3.11.0 with Apple Watch support is available now through the iOS App Store as a free download. The R1 drone is currently available from the company’s website on a 1-2 week delay and will be coming to the Apple Store to join a larger variety of less expensive and less autonomous DJI Mavic and Spark models.