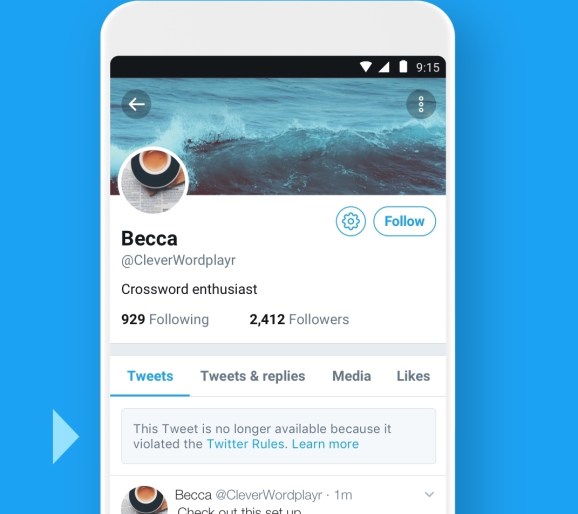 If you’re an avid Twitter user, you’ve probably clicked on a tweet that’s racked up quite a few retweets or likes among your followers, only to get a message that this tweet is no longer available. It could have been because the user deleted the tweet themselves unprompted, or because the tweet was reported for violating Twitter’s rules.

Now, Twitter will include a notice when a tweet has been removed for violating its rules. The message will read, “This Tweet is no longer available because it violated the Twitter Rules,” with a link to Twitter’s ever-changing public-facing document about what is and isn’t allowed on Twitter. The message won’t say how exactly the user violated Twitter’s rules.

“Improving our communication around steps we’re taking to keep you safe remains one of our top priorities. We hope these changes bring more clarity on how and when we our enforce our rules,” Twitter product and health employees David Gasca and Sam Toizer wrote in a blog post.

Last September, when President Donald Trump tweeted what some users interpreted as a declaration of war on North Korea, Twitter initially refused to comment on the tweet, and then a day later gave the public slightly more information when it said that it also takes “newsworthiness” and whether or not a tweet “is of public interest” when deciding whether or not to keep a tweet up.

The company also announced today that it will hide a tweet from a user’s timeline once they’ve reported it, even if Twitter hasn’t taken action on it. This is a much-needed change, given that Twitter can’t always immediately act on tweets that users believe violate the company’s rules.