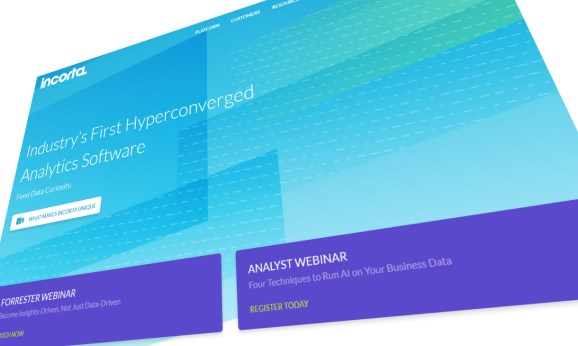 Data analytics software startup Incorta has raised $15 million in a series B extension round of funding from Microsoft’s venture capital (VC) arm M12 and Telstra Ventures, which closes the round at a total of $30 million.

This latest investment tranche comes a year after Incorta first announced a $15 million series B funding round, with investors including Kleiner Perkins and Alphabet’s VC division GV. And a year previous to that, GV led a $10 million series A round into the San Mateo-based startup. So with this news, it’s interesting to see both Microsoft and Google’s parent company now invested in the same startup.

The funding announcement was also timed to coincide with the company’s Fall ’18 Incorta platform release.

Incorta’s core underlying promise is that it can help IT departments deliver new reports “within minutes as opposed to weeks,” according to the company.

“Business agility is severely hamstrung when queries take hours to respond despite running the analytical and reporting applications on very expensive and highly engineered appliances,” noted Incorta CEO Osama Elkady. “Within weeks, our customers are able to replace these appliances with the Incorta platform that scales horizontally on commodity hardware, on-premises or in the cloud, while delivering orders of magnitude faster query response times.”

The global cloud data warehouse market is expected to emerge as a $20 billion industry by 2020, up 40 percent from the $14 billion it was reportedly worth last year, according to IDC. And this, coupled with a growing demand for broader business intelligence services, is why we’re seeing a spike in investments in the space.

A few weeks back, San Mateo-based data warehousing company Snowflake Computing raised a chunky $450 million in funding at a $3.5 billion valuation. And a few months back, Palo Alto-based Yellowbrick Data emerged from stealth with $44 million in funding from big-name investors including GV.

Incorta’s clients include Broadcom, Henkel, Wadi Group, and a host of other Fortune 100 companies.

“Incorta’s approach to analytics fundamentally changes how quickly data is turned into insights at massive scale,” added M12 partner Rashmi Gopinath. “We’ve invested in Incorta because of the amazing list of Fortune 100 companies that have bet big by deploying Incorta technology in their most strategic data initiatives.”