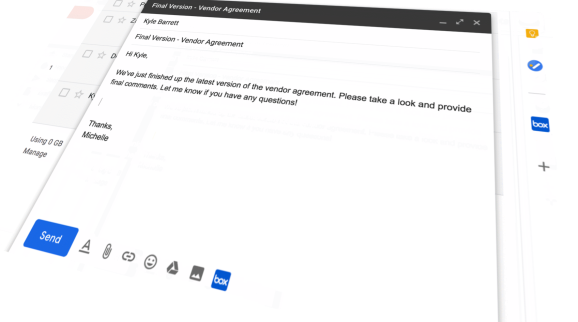 Available as part of Gmail Add-ons, an extensibility framework that launched last year to allow developers to integrate their app’s functionality directly into Gmail, Compose actions are all about making it easier to access documents and data from third-party services directly from within the message compose window.

This builds on similar existing tie-ups that have previously been enabled between Gmail and enterprise apps via Add-ons.

Both Dropbox and Box are included, meaning you can easily link to your cloud-based documents or upload files, and you can also save files from Gmail directly into Dropbox or Box.

This is a somewhat tacit acknowledgement from Google that a company may subscribe to G Suite without being a fan of Google Drive.

Dropbox rival Egnyte will also integrate at launch, allowing Gmail users to save email attachments to the cloud-storage service, as well as easily inserting links to Egnyte files and folders from within an email message.

The fourth and final inaugural integration is with Atlassian Cloud, which enables users to carry out “several actions” when Gmail detects a Jira or Bitbucket link. These actions include allowing users to add previews of Jira issues to their emails.

Google launched Gmail Add-ons for G Suite users last October, kicking off a bunch of integrations with the likes of Asana, Hire, QuickBooks, and Trello. With Compose actions now part of the mix, admins can better customize the functionality of Gmail for their employees, and when they authorize a Compose action it will be available across all platforms on mobile and web.

“Research shows that workers spend up to eight hours per week searching for, or consolidating, information,” noted Gmail and Chat platform product manager Aakash Sahney, in a blog post. “Whether it’s digging through various file folders to find and attach a document or hopping from your project management or CRM app to copy-paste links in email, all of that back-and-forth adds up.”

Compose actions can be installed via the G Suite Marketplace from today, and Google has promised more third-party actions will be arriving for Gmail shortly.