As ebikes proliferate and pile up along sidewalks, a new French company claims it can bring some sanity to a sharing economy idea gone sideways.

Eric Carreel, cofounder of connected health company Withings, today announced Zoov — a new ebike sharing service that wants to reinstate the bike station. But in this case, in addition to a funky bike design, the company says its super lightweight and compact bike stations will help reduce urban impact.

While the ebike field is getting crowded, the promise of new urban mobility programs is often squandered by the sight of vehicles left casually on sidewalks around the city or unsightly bike racks cluttering up the panorama.

Zoov’s bike station design can hold 20 bikes within an area the size of a typical parking space. The company says it will start its service in Paris suburbs in November.

Zoov stations “work like shopping carts in supermarkets,” the company said in a release. The first bike is attached to the second, and so on, with the last one being the bike that is available — like pulling out the last shopping cart. That minimizes the size of the station, and the bikes are designed to be placed incredibly close together. The company will install stations for free.

Users unlock a bike using the Zoov app and their Bluetooth connection. 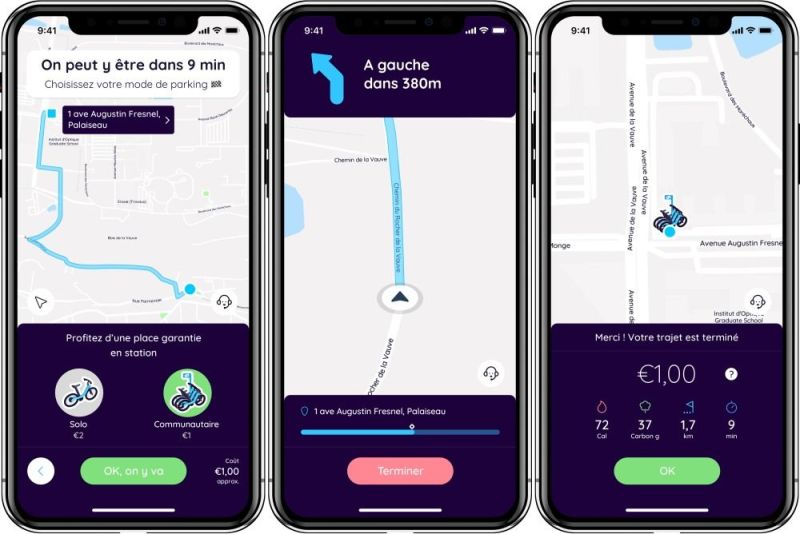 Carreel also recently re-acquired Withings from Nokia, which bought the company two years previously in a deal that went horribly wrong. While working on Zoov, Carreel is also trying to resuscitate Withings with a new line of connected health gadgets.

The cofounders have been working on Zoov with designers at Elium Studio, who have also worked on other Withings products. Carreel says in the company press release that sensors on the bikes and the data they collect will help Zoov continue to improved its product.

“One of the main challenges for shared mobility companies is to be able to offer high-quality service over the long term,” Carreel said in a statement. “We learn from data sent every day from our bikes, so that once a problem is detected we can take action before it becomes a critical issue for our users.”