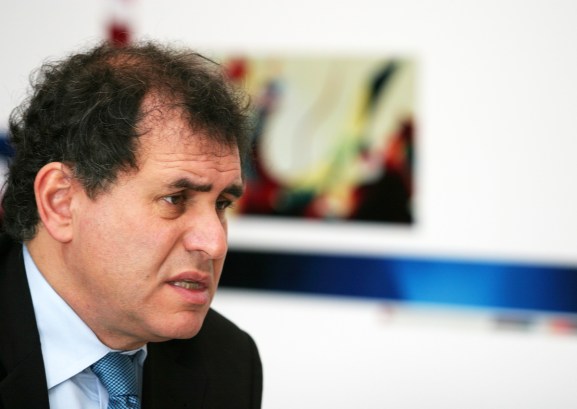 NYU economics professor Nouriel Roubini’s latest piece of demagoguery entitled “The Big Blockchain Lie” should get a F grade for confounding blockchain with Bitcoin. Real world blockchain use cases are happening now at the enterprise level and Roubini’s labeling them as “glorified spreadsheets” is impetuous and worthy of a Donald Trump late night tweet.

There are countless times in technology where an upgraded version of a technology product may be referred to, albeit glibly, as “glorified”. In Roubini’s view isn’t Slack simply a “glorified chat/messaging system”? Isn’t Uber a “glorified taxi/livery service”? Wasn’t the iPod really only a “glorified Sony Walkman”? I will spare you any more analogies, but blockchain is far from a glorified spreadsheet, and the following delineation will lay it out so even Professor Roubini can understand.

Perhaps Roubini’s most outlandish and preposterous claim, and yes it was difficult to highlight just one, is the following quote:

In practice, blockchain is nothing more than a glorified spreadsheet. But it has also become the byword for a libertarian ideology that treats all governments, central banks, traditional financial institutions, and real-world currencies as evil concentrations of power that must be destroyed

Again, Roubini is confusing blockchain for use by enterprises with some Bitcoin libertarians. The largest implementations are being done in concert with regulators, central banks, and traditional institutions. In almost every instance involving financial blockchain implementations that I will detail below, there are deep ties and connections with the aforementioned entities. Roubini may want to venture outside of the academic halls for some due diligence.

Blockchain has four core attributes that make it a critical enterprise-worthy technological phenomenon:

Blockchains are permissioned environments where every participant is vetted and approved by the others. Roubini states that no bank or government agency would ever put their valuable balance sheet assets on a public ledger for anyone to see. In the banking world, these participants are competitors of some ilk who under most circumstances would never share information. However, when a blockchain is the basis for the sharing, the participants trust one another as there is no ability to alter a document or spreadsheet without it generating a red flag to all other participants in real time.

Prior to blockchain, communication was done in a highly manual manner with emails, faxes, messages back and forth. The incidence of error is/was very high. Further, there was a time delay in transit such that mistakes might not be picked up or, if they were, corrections might be made too late. Consider the infamous $2 billion PNB fraud in India earlier this year; it was discovered after 7 years that documents were forged and altered involving SWIFT and other systems to circumvent the law.

Clearly a “glorified spreadsheet” would not have prevented this problem, as changes could be made without anyone being the wiser. However, with blockchain these changes and forgeries would have generated red flags alerting authorities to the fraud in near real time.

Smart contracts allow the automation of certain task based on previously agreed terms. The agreement is validated, signed, and enforced in real time and precludes the need for costly mediators. Similar to when someone DocuSigns an agreement, a contract is signed and an immutable digital time stamp is generated, secured, and stored in a hash.

While scalability has been a big question mark around blockchain, it is becoming less and less of an issue. Just this week, DTCC in conjunction with Accenture conducted an extensive study that showed blockchain technology was able to handle the volume of the US Equity market, which is around 100 million trades per day. Again, blockchain is not synonymous with the permission-less Bitcoin market that can handle much less volume.

While there are failed proof of concepts (POCs) with blockchain, it’s to be expected of any revolutionary technology with such incredible prowess — just as the Internet had its share of Snowball.com, Webvan, eToys, and Pets.com busts that had half-baked business plans and tons of money to burn. However, the Internet eventually brought us Amazon, eBay, Google, and a host of great companies who harnessed the revolutionary technology.

According to Juniper Research, 65 percent of enterprises with 10k employees+ are considering or actively engaged in blockchain deployment. One quarter of these POCs are turning into trials or commercial rollouts. One of the main reasons these projects aren’t more quickly turning into production is because of their potential to disrupt either internal or client systems. Thus companies, especially banks, must tread lightly.

There are a few impressive real-world implementations that have used blockchain technology to establish real production environments today.

Microsoft in partnership with E&Y has a blockchain solution to be initially used for game publishers’ rights and royalties. Eventually it will be expanded to any other sector with royalty rights such as music — again perfect use case for blockchain because of its decentralized nature and smart contracts.

MonetaGo, a NY/India based blockchain software developer, brought together the three competitive factoring companies in India to share information on which MSME receivables had been presented for factoring. The launch would have been impossible without blockchain as these companies don’t trust their competitors, especially in a country where fraud is so prevalent.

Digital Asset has been engaging with Australia’s Stock Exchange (ASX) for two years to migrate the entire national stock exchange to a blockchain solution. Given the magnitude of the endeavor, it will not be fully deployed until late 2020/early 2021.

AXA has been offering flight insurance known as “Fizzy” to any passenger whose flight is delayed over two hours. Without waiting for any bureaucrat to approve the payout, smart contracts pay the passenger immediately once the event occurs.

Broadridge has invested over $150 million, according to Barron’s, to develop a blockchain solution for the tremendously outdated proxy voting industry.

Gates vs. Roubini — who would you take?

Blockchain is poised to become an incredibly valuable technology across industries. But just like the personal computer and the Internet, there will be many casualties. Follow Bill Gates’ sage advice and hang in there on blockchain and you will be richly rewarded.

Josh Burwick is an active venture investor, financial advisor and cofounder of Sand Hill East. He previously worked at Goldman Sachs and ran a technology portfolio at hedge funds including Moore Capital.