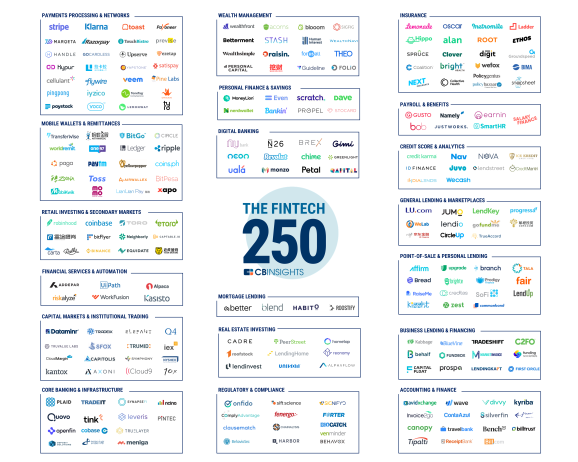 A new report on the explosion of financial startups has found that at least 30 of them have now attained unicorn valuations. The finding is part of the second annual Fintech 250 list published by research firm CB Insights.

“After we named the inaugural Fintech 250 in 2017, they went on to raise $23 billion, including 30 rounds of over $100 million,” said CB Insights CEO Anand Sanwal, in a statement. “This year, we’ve added 113 new companies to the Fintech 250, using the CB Insights Mosaic algorithm, and the group is broad, covering everything from insurance tech to consumer banking to capital markets tech.”

The list brings into focus just how hot this sector has become. Those venture capital rounds Sanwal references are spread across 373 deals. And since 2013, there have been a total of 82 financing rounds north of $100 million, the report says.

Not surprisingly, 22 companies on the list have had exits, with half going the IPO route. But even as some depart, new ones arise. The report says 113 new companies are on the list this year.

And the phenomenon is global. At least 44 percent of the companies are not in the U.S., and they are spread across 31 countries.

China’s Ant Financial ranks as the top fundraiser on the list, with $19.1 billion over four rounds.