Google today announced that it will automatically upgrade movies you have purchased on Google Play to 4K, for free. Your past movie purchases will be streamable in 4K, even if you originally bought the movie in standard definition (SD) or high definition (HD).

The lengthily named Google Play Movies & TV first got 4K titles in December 2016, just a week after Google-owned YouTube added support for livestreaming in 4K. Google Play Movies & TV did not allow upgrading your existing SD and HD movies to 4K — upgrade pricing was apparently something Google didn’t think of. It was not even possible to remove a movie from your account and purchase it again in 4K at full price. Google is now finally rectifying the problem it created by taking care of the upgrades for you and not charging anything.

There is, however, some fine print — and you don’t have to squint to see it. While all you have to do is open the Google Play Movies & TV app and it will let you know which SD and HD titles have been upgraded, don’t expect all your titles to immediately get the 4K treatment. The automatic upgrade will of course only kick in when the content becomes available in 4K, and that depends on when the “participating Hollywood studios” (Fox, Lionsgate, NBC Universal, Sony, and Warner Bros.) decide to do so. 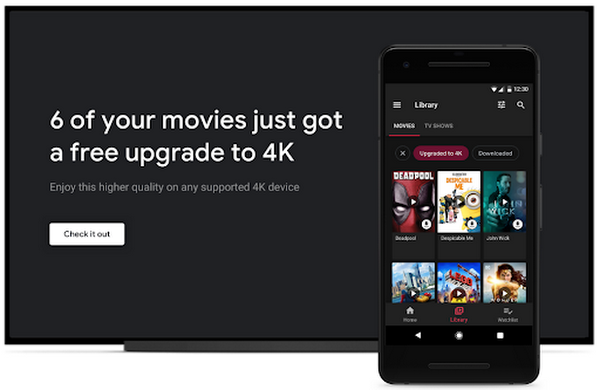 “We will upgrade titles internationally when 4K availability expands to more territories,” a Google spokesperson told VentureBeat. “We don’t have timelines to announce, but we are actively working on international expansion.”

In the meantime, Google is promising that 4K movies on Google Play “will cost you less.” You can see all the 4K titles and their new pricing here: Top 4K movies. The Google Play Movies & TV app also now works on most 4K Samsung Smart TVs. Google is working on adding support for LG, and the app has gotten a modern look and feel.