Google has announced the latest in a line of initiatives designed to boost its privacy credentials among its billions of users globally.

The internet giant has revealed that it is bringing a new data history view-and-delete feature directly into each of its products, saving you from having to visit the dedicated privacy and security portals in your Google Account.

At first, this new feature will be limited to Google Search, where it will effectively bring data controls to the user that are specific to that function.

To access this feature, hit the little menu button and navigate to “Your data in Search,” where you will find recently searched keywords and websites.

Here, you can peruse or delete your Search activity. 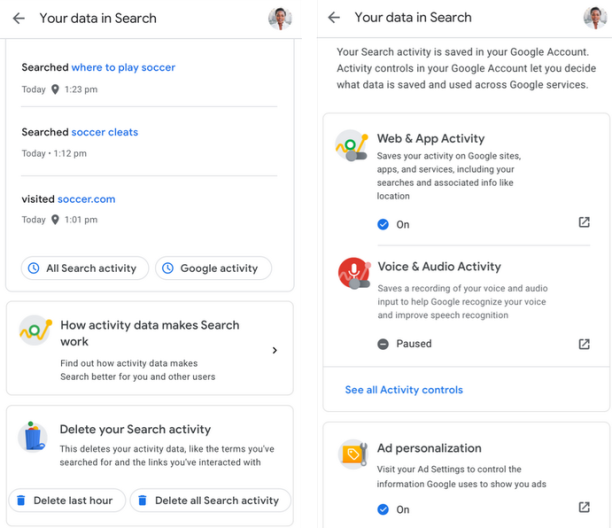 Above: Google: “Your Data in Search”

This is rolling out to Google Search on the mobile web and desktop today and will be included in the native Google apps for Android and iOS “in the coming weeks,” Eric Miraglia, Google’s director of product management, wrote in a blog post.

And although it is limited to Google Search for the moment, Miraglia did note that it will be landing in other Google products, such as Google Maps, next year.

“Having access to relevant and actionable privacy controls directly from the Google products you use every day is just one way that we are continuously working to build privacy that works for everyone,” he said.

Today’s news comes four months after Google introduced a Google Account makeover, which features a host of security and privacy updates, including a clearer layout and a new search feature.

As part of the update announced today, Google added that it’s also serving up a new quick access feature that gives users a direct channel to their broader privacy controls, including which ads they see when they’re in Google products.

There has been an uptick in privacy-focused features from all the major technology companies this year, seemingly as a result of the Facebook and Cambridge Analytica data scandal. This latest refresh from Google fits neatly into that broader push.