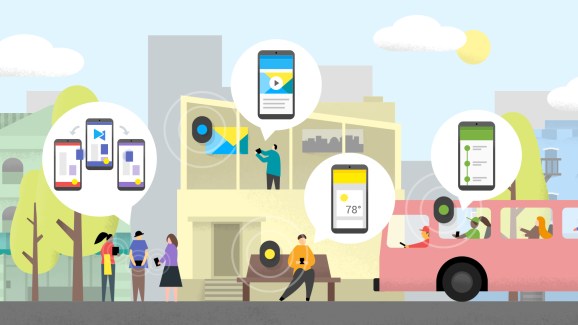 Apple, Google, and other tech titans once trumpeted beacons — tiny transmitters that interact with smartphones, wearables, and other nearby gadgets — as the future of retail. The consensus roughly five years ago was that radios in restaurants, retailers, and sports stadiums would drive contextually relevant, highly personalized promotions to patrons within range of their wireless signals.

It didn’t quite work out that way.

Google this week did away with Nearby Notifications, following on the heels of its decision to gut support for Eddystone from Android and Chrome in October 2017. In the years since Eddystone and Apple iBeacon were introduced, beacon adoption among brick and mortar chains has slowed to a trickle. Now only a handful of brands — Target, Starbucks, and Walmart, to name a few — continue to invest in beacons.

This bearishness comes down to platform issues, mostly, with security vulnerabilities and poor reception thrown in for good measure. Technological shortcomings aren’t to blame, as you’ll see in our brief history of beacon platforms. The truth is, it’s a bit more complicated.

Apple quietly introduced iBeacon during the company’s 2013 Worldwide Developer Conference in San Francisco, alongside iOS 7. The feature, which had been rumored for months leading up to its unveiling, uses Bluetooth Low Energy (BLE) to broadcast an identifier to iPads and iPhones at millisecond intervals. BLE (formerly marketed as Bluetooth Smart) implements a mesh specification that allows for many-to-many communication over Bluetooth; in other words, BLE devices can exchange information with any number of others in a network.

iBeacon is capable of more than just triggering push notifications. It supports region monitoring (in up to 20 regions), enabling BLE beacons to make note of when devices enter, linger in, and exit a given area, and it can use that information to trigger notifications and alarms. It can also approximate the distance between an iBeacon and target device and categorize it into three distinct ranges: immediate, or within a few centimeters; near, within a couple of meters; and far, greater than 10 meters away.

Google announced something of a competing platform in 2015: Eddystone, an evolution of its prototypical UriBeacon technology. Unlike iBeacon, Eddystone (named after the Eddystone Lighthouse in the U.K.) is hardware agnostic — it works with iOS, Android, and any other hardware that can communicate with BLE beacons — and it supports features like multiple frame types, versioning, and ephemeral identifiers (EIDs) that change frequently and allow only authorized clients to decode them.

Eddystone is a part of Google’s open source Physical Web project, which aims to create “on-demand interactions” with smart devices. As Scott Jenson, an interaction and UX designer at Google, explained on the project’s GitHub page: “People should be able to walk up to any smart device — a vending machine, a poster, a toy, a bus stop, a rental car — and not have to download an app first. Everything should be just a tap away.”

BLE beacons are pretty energy-efficient, as you might expect — some can last for up to two years on a single cell battery. They operate on the 2.4 GHz – 2.4835 GHz spectrum range; can reach up to 450 meters; and they’re cheap, ranging in cost from $5 to $50.

BLE beacons of all flavors can pinpoint a device’s location. How? Transfer power — the strength of the wireless signal measured at one meter from the target phone, smartwatch, or tablet — decreases as distance increases, and because the strength of the signal at exactly one meter from the device is calibrated and hardcoded into the beacon, BLE beacons can compare the two values to calculate a rough distance.

Alongside Eddystone, Google released the Nearby API for Android and iOS, which uses a combination of Bluetooth, Wi-Fi, and inaudible, ultrasonic sound to establish proximity.

The Google beacon platform — also launched with Eddystone — includes the Proximity Beacon API, which lets developers tie content to individual beacons. Using a system of “attachments,” they’re able to associate semantic location and related data that can be updated in real time and retrieved with an app using the Nearby API (through Google Play Services) and the Nearby library for iOS.

Beacons appeared to be off to a promising start five years ago. And roughly 4 million beacons were active at the beginning of this year, up from 500,000 in 2015 — a nearly 900 percent increase in three years.

Retailers and restaurants rushed in with the same zeal. Department store chain Macy’s deployed thousands of beacons inside more than 800 stores, where they beamed sales information and offers to shopping rewards app Shopkick. Lord & Taylor followed suit with its coupon app SnipSnap, as did American Eagle and Aerie. McDonald’s franchisees in Columbus, Georgia and elsewhere used it to push deals to select customers. And Starbucks said it would roll out beacons at its premium-coffee Roastery and Tasting Rooms.

There were signs of success early on. In the 2014-2015 season, San Francisco’s Golden State Warriors saw average transactions across items rise 87 percent, and the Orlando Magic reported an increase of over $1 million in ticket sales due to beacon engagement and messages. The aforementioned McDonald’s franchisees saw increased sales, as well. And Macy’s saw a 16 times boost in in-store engagement.

But by 2015, only 3 percent of retailers in the U.S. had implemented beacon technology, and only 16 percent had plans to implement beacons.

App dependence was (and is) a major hurdle. It’s tough to convince customers to download a service they’ve never used, even with the promise of discounts — especially considering up to 70 percent haven’t heard of beacons.

Power and range limitations pose an additional challenge. Only about 40 percent of users in North America report using Bluetooth (though it’s worth noting that on most newer devices, Bluetooth interacts passively with BLE beacons), and Bluetooth signals are more easily obstructed by physical objects than Wi-Fi. Though they last for years in some cases, beacons’ batteries also have a finite lifespan. Deployment takes a lot of planning and testing.

Beacons tend to be spammy, too. Google cited “a significant increase in locally irrelevant … notifications” as the reason it decided to discontinue Nearby Notifications, and not without good reason. One recent study showed a 313 percent decline in shopping app use by customers who received more than one beacon notification in a single location.

And then there’s the matter of privacy. Few in-store apps are explicitly clear about what sort of location and behavioral information they’re collecting, which can include metrics like visits, unique visitors, new visitors, popular paths, repeat visits, retention, and more. The same goes for APIs like Google’s Nearby, which came under fire from privacy advocates concerned about how the audio component of the beacons is recorded and stored.

None of that’s to suggest beacons are entirely dead. Big-name retailers like Walmart, Rite Aid, and Target continue to trial BLE beacon-powered in-store shopping experiences; Google’s providing beacons to retailers in the U.S. and U.K.; and overall annual beacon shipments are expected to hit 565 million units by 2021.

But they’re certainly not poised to revolutionize the way we shop, dine, and cheer on our favorite sports teams — at least, not anytime soon.