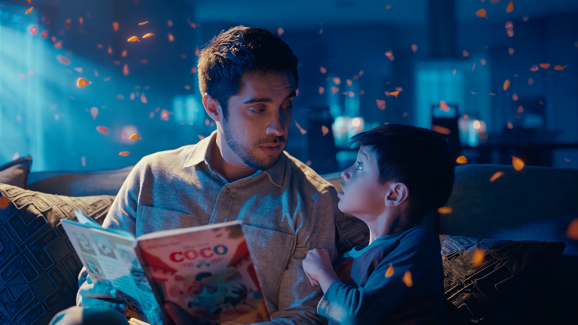 Putting the kids to bed getting to be too much of a chore? Give the Google Assistant’s new skill a try — it might help nudge them in the right direction. Google today announced it’s teaming up with Disney and Penguin Random House for a “read along” app that pairs the latter’s Little Golden Books series with music and ambient noise.

Starting this week, saying “Hey Google, let’s read along with Disney” within earshot of a Google Home speaker will kick off the app’s voice recognition feature, which matches sound effects to key points in ten Disney children’s books. Ask it to advance a few pages, flip back, or repeat a chapter and it’ll queue up the corresponding soundscape. And if you pause for any reason, it’ll play a cheerful tune in the background until you pick up the story again.

“We hope that it’s something that parents will do with their kids each and every day,” Kelsey Gliva, product marketing manager at Google Home, told Adweek. “As we look to the future, thinking about the context of the family and ways that we can enhance routines that they already do is something that we’re really interested in. We know that parents and their kids are sort of fearless when it comes to assistant technology — they ask lots of questions and they engage, and we know with Disney’s iconic character voices, it’s a really fantastic way to bring this to life. So it’s a no-brainer to continue working with them.”

Today’s new skill is the tenth such Google Home collaboration between Disney and Google, and comes after the debut of the Den Series for Google Home Mini featuring Disney Mickey Mouse, a $20 OtterBox base that props up a Google Home Mini speaker at an angle. The companies’ partnership has occasionally been marked by controversy; in March 2017, Google rolled out an audio clip informing listeners of Disney’s live-action Beauty and the Beast as part of its My Day feature. It denied it was an advertisement.

Google’s not the only one catering to kids with voice-activated skills and hardware.

In April, Amazon released the Echo Dot for Kids, an $80 Echo Dot wrapped in a padded foam enclosure that comes with a two-year damage replacement warranty and one year of FreeTime Unlimited. FreeTime for Alexa — which starts at $2.99 for Prime members and $4.99/month for one child or $9.99/month for a family plan for non-Prime members — allows parents to review their kids’ activity, put time limits on their usage, or block songs with explicit lyrics on Amazon Music. Moreover, it brings exclusive features to the table, such as ad-free radio or playlists, alarms from Disney and Nickelodeon characters, and premium skills from National Geographic, Disney, and Nickelodeon.