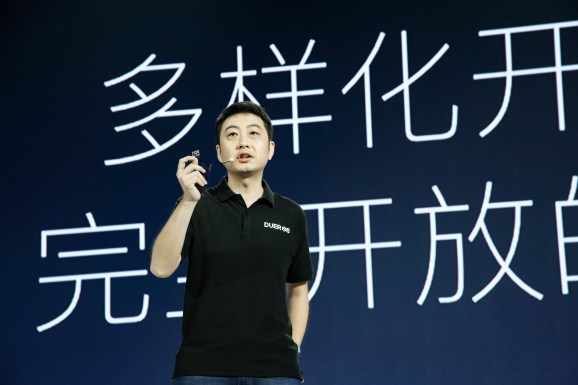 Kun Jing, head of the DuerOS division at Baidu, holds up a computer chip with DuerOS preinstalled in it at Baidu Create July 5, 2017 in Beijing, China

Watch out, Alexa, Cortana, Siri, and the Google Assistant: Baidu’s voice assistant is coming for you. Beijing tech giant Baidu this week announced that DuerOS, its natural language processing platform, is now installed on over 150 million devices and has more than 35 million monthly active users. That’s up from 100 million devices in August. Voice queries on the platform, meanwhile, topped 800 million.

There’s a marketplace component to DuerOS, too — software developers can create “skills” accessible through smart speakers and televisions. More than 16,000 are actively contributing, and in November 2017, Baidu launched a $1 million fund and open dataset, the DuerOS Prometheus Project, aimed at “fostering talent” in the conversational AI space.

DuerOS hasn’t quite reached the storied heights of Amazon’s Alexa and Alexa Voice Service, which have more than 50,000 third-party apps and 3,500 brands signed on — not to mention compatibility with 20,000 smart home devices. But Baidu said it’s working with heavy hitters including Huawei, Vivo, Oppo, and others to integrate DuerOS into future flagships, in addition to automakers such as BMW, Daimler, Ford, Hyundai, Kia, Chery, BAIC, FAW, and Byton and hotel chains like InterContinental.

Perhaps the highest-profile devices in Baidu’s DuerOS ecosystem are Xiaoyu Zaijia (which means “Little Fish”), an Amazon Echo Show-like device with a swiveling screen and camera, and Baidu’s Xiaodu Smart Speaker, which launched in June 2018 and sold out within 90 seconds of availability. Baidu slashed the price of the Xiaoyu Zaijia this week — it’s RMB 299 ($43) for a limited time, down from RMB 699 ($100).

DuerOS isn’t the only Baidu business that’s growing at a healthy clip.

Baidu today  announced the AI Fundus Camera, which it claims is capable of screening three types of ocular fundus disease — also known as Stargardt disease — in less than 26 seconds or less. In tests with eye hospitals in Tongren and Zhongshan, the company said it was more than 94 percent sensitive to labeled electronic scans of fundus.

In other news, the Baidu App now has more than 160 million users, over 110 million of whom actively consume videos on Baidu daily. And the Beijing firm’s Smart Mini Program — an initiative launched in July that lets third-party developers create mini-apps via a web portal — has amassed more than 150 million monthly active users, up from 100 million during the two-month beta test period earlier this year.

Baidu also took the wraps off of partnerships with Volvo, Ford, and Chinese state-owned car company FAW, and said it plans to start self-driving car trials in Beijing by the end of 2018. Moreover, it revealed that it’d launch a fleet of more than 100 autonomous taxis in 2019 — the first powered by its Apollo Intelligent Vehicle Infrastructure Cooperative System, which integrates connected vehicles with smart road infrastructure to improve safety.

Today’s announcements come on the heels of new AI framework and hardware solutions from Baidu.

Earlier this month, it demonstrated an AI system capable of beginning a translation just a few seconds into a speaker’s speech and finishing seconds after the end of a sentence. And in July, Baidu unveiled a custom-designed AI chip — Kunlun AI — for edge and cloud computing, alongside Baidu Brain 3.0, a suite of 110 AI services ranging from natural language processing to computer vision.