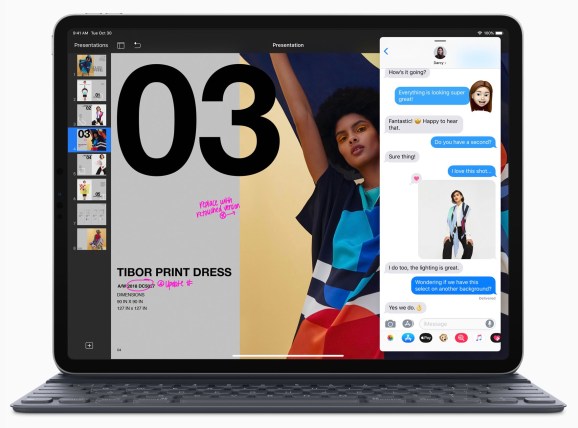 Prior to Apple’s official unveiling of the third-generation iPad Pro this week, it was clear that a new A12X Bionic processor could finally match the speeds of current-generation MacBook Pro laptops if Apple was ready to pull the trigger. Now early Geekbench benchmark results are confirming as much: the iPad Pro rivals the latest Intel Core i7 CPU-equipped Apple laptops, seemingly despite significant price gaps.

Scores popping up on Geekbench Browser for the iPad 8,8 — an eight-core iPad with the rumored 6GB of RAM allegedly found in 1TB storage configurations — are showing single-core scores between 5030 to 5083, with multi-core scores ranging from 17771 to 17995. Those numbers place the new iPad Pro directly between Apple’s 13-inch and 15-inch MacBook Pros with Intel Core i7 processors:

Of course, the comparison isn’t exactly apples to apples, as the $799 iPad Pro has an 11-inch screen, and even the 12.9-inch iPad Pro has a slightly smaller display than the smallest MacBook Pro. Moreover, choosing the iPad Pro over the laptop means fewer USB-C ports, the need for a separate keyboard accessory, and other compromises. But the raw hardware performance and battery life are now in the same range as Apple’s professional tablets and laptops, with the tablet having an advanced touchscreen and superior cameras as assets.

Since Apple is somewhat opaque with iPad specs, it’s unclear at this moment whether the pricey 1TB models will actually outperform less expensive versions, but historically the answer has been “no.” As of today, Apple’s iPad Pro tech specs page provides no indication that there’s any performance difference between models based on capacity. If that’s the case, the latest A12X Bionic-equipped tablets are an even better deal than they initially appeared to be during their introduction event, and a truly worrying sign for both Intel and Qualcomm, which will have to redouble their efforts to reach mobile chip performance parity for competing devices.