Transit, a Canadian startup that’s setting out to simplify urban mobility by combining modes of transportation and working directly with cities, has raised $17.5 million in a series B round of funding from Accel, Alliance Ventures (Renault, Nissan, and Mitsubishi), Jaguar Land Rover’s InMotion Ventures, and Real Ventures.

Founded out of Montreal in 2013, Transit is one of several services offering a consumer-focused city transport app that joins the dots between your starting point and destination, working out what combination of transport options would be best.

The app integrates everything from buses, trains, and etaxi apps to bike-sharing and ride-sharing services. 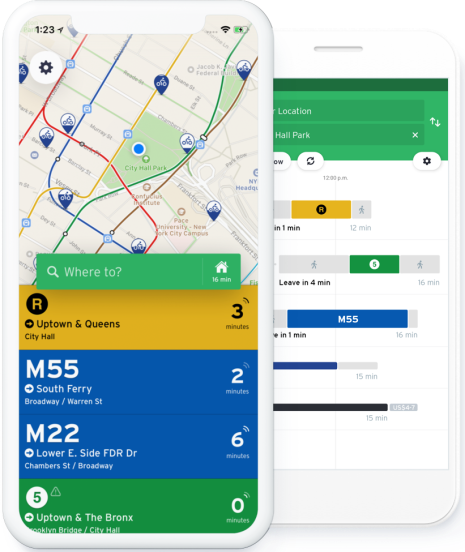 Additionally, Transit is seeking to position itself as a data source for cities. A couple of years back, Transit was chosen by the Massachusetts Bay Transportation Authority (MBTA) as the city’s official transportation app — the idea being that the region could access better travel data if it came from a single source. Since then, the app has been endorsed by other cities around the world, including Silicon Valley, Baltimore, and Montreal.

Prior to now, Transit had raised nearly $10 million, including a $5 million series A round led by Accel last year, and with its latest cash influx it plans to expedite efforts to eliminate the car by making it easier to travel on public transport.

“It [the investment] will let us double-down on all the projects we’ve been working so hard on: adding deeper integrations to make car-free transport more discoverable, expanding those integrations to more and more services, pushing for more cooperation between modes, and continuing to be the trusted rider platform for our transit agency partners,” the company said in a blog post.

Nabbing major carmakers as investors is notable, especially given Transit’s self-proclaimed mission to kill off the car. Indeed, as a result of its investment, Alliance’s investment director Christian Noske will be joining Transit’s board.

“We’re taking on cars, and we’re taking carmakers’ money to do it,” the company added. “We didn’t wear a Transformer costume when we pitched our friends at Alliance or InMotion Ventures prior to raising this round  —  but might have if our delivery man came on time,” Transit continued, somewhat tongue-in-cheek (we hope).

Elsewhere in the world, London-based Citymapper offers a similar service, and it too has been building out its transport options to encompass anything and everything, including dockless bikes and scooters, while also working on its own commercial bus service to plug the transport gaps using data.