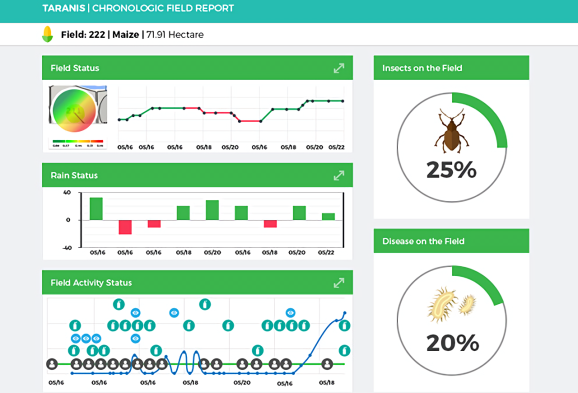 A global hunger crisis looms. By 2050, there will be more than 9 billion mouths to feed, and projections indicate that global yield will have to roughly double to meet demand. That’s easier said than done. Currently, about 45 percent of the world’s crop calories are fed to livestock or turned into biofuels and industrial products.

Part of the problem comes down to a lack of data, said Ofir Schlam, who cofounded agriculture-tech startup Taranis with Asaf Horvitz, Eli Bukchin, and Ayal Karmi. Without data, farmers are effectively flying blind; they can’t customize growth plans to individual crops or get a reading on hyperlocal conditions or react to emerging threats — like diseases, parasites, and weeds. He pitches Taranis’ artificial intelligence (AI) platform as the solution: a combination of high-resolution imagery and sensors with an intelligent layer that derives real-time and historical insights with greater-than-90-percent accuracy.

Taranis — a graduate of Microsoft Ventures — aims with the investment to capture a larger slice of the $1.5 billion global agriculture tech business.

“We are excited to advance our mission of providing farmers with the technology and know-how to effectively maximize crop yields while maintaining operational efficiency,” Schlam said. “We have already helped thousands of farmers monitor crops for potential hazards. Now we’re looking forward to expanding our footprint around the globe.”

Taranis’ core product, the eponymous Taranis UHR, captures multispectral imagery — photographs produced by sensors that measure reflected energy within several bands of the electromagnetic spectrum — at 8-12cm using a proprietary sensor pod that minimizes motion blur. The company retains a fleet of 60 Cessna aircraft to perform that photography at scale, frequently at altitudes as low as 10-30m. 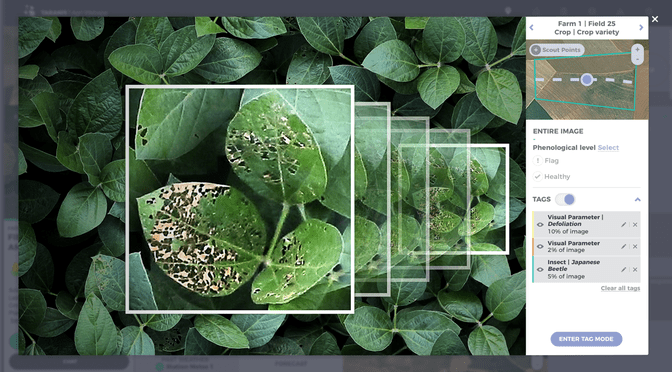 Part of that imaging tech comes from San Francisco company Mavrx, which Taranis acquired in May. According to Schlam, each plane can cover up to 50,000 acres per day, or a 100-acre field in just over five minutes — a fraction of the time it’d take a team of human scouts.

After the images (about 1-2 per acre) are collected, they’re stitched together with the help of algorithms. Then AI comes into the picture. Based on measurements taken during the UHR step, Taranis’ model classifies and analyzes each grid segment, zooming into photos of the crop at 0.3-0.5mm per pixel.

That’s a high enough resolution to count beetles on a leaf, Schlam said.

In that way, it’s not far removed from solutions like IBM’s Watson Agriculture — which leverage a combination of AI, internet of things (IoT), and cloud products to predict crop prices, combat pests, and more — and computer vision startups like Prospera and Arable. But Taranis goes deeper.

With the data in tow, Taranis’ AI can report plant population regardless of the growth stage of the crop and calculate plant emergence, row spacing, row length, canopy cover, plant height, stand height, tree diameter, and flower count. Moreover, it can detect when a weed emerges that constitutes a potential threat and automatically classify it and suggest tailored herbicide solutions. It can even calculate the amount of nutrients in vegetation, the water content in the soil, and plant temperature.

Equally as robust as the system’s growth tracking is its disease analysis. Taranis’ models run in two modes: site-specific and regional. In the former, data is recorded in the field and takes into account scout reports, pesticide applications, and data from ground-level sensors, plus records in regional weather stations. In regional mode, it estimates the suitability of conditions of disease outbreak in the entire area (country, state, and region) and represents the potential risk, using a heat map for the entire area.

All those projections and more are delivered via mobile and web apps that prioritize crop regions for investigation and direct scouts to fill out crop-specific reports with photos, voice memos, and areas of interest farm managers can view and analyze in real time. From within the same apps, managers can designate tasks and activities for any field, categorize tasks, and assign those tasks to employees or view a history of tasks and current task status.

Schlam claims that Taranis’ suite can boost across-the-board crop yields by as much as 7.5 percent.

Currently, the startup serves more than 19,000 farms in the U.S., Canada, Brazil, Argentina, Russia, Ukraine, and Australia, and it has local offices in all of those locations staffed with a collective 60 contracted agronomists who manually train the system and identify problems. Taranis is currently targeting commodity crops — corn, cotton, sugarcane, soybean, wheat, and potatoes — and charges $5-$20 per acre per season.