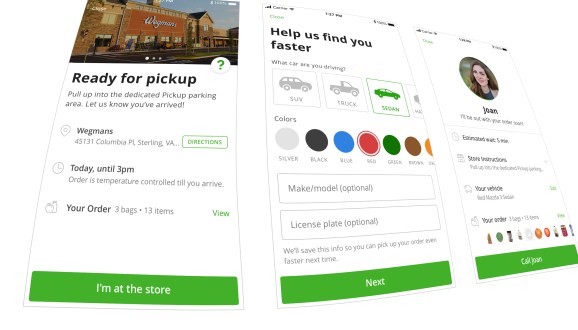 Instacart announced that it’s launching its new pickup grocery service across the U.S.

The San Francisco-based company has been trialing a pickup service since at least June and has been slowly expanding the service to more outlets and locations in the intervening months.

Founded in 2012, Instacart has traditionally partnered with local stores to offer same-day deliveries on thousands of grocery products. The company has raised around $1.6 billion in funding, including $200 million and a follow-on $600 million tranche in 2018 alone. Though it has largely kept operations in the U.S. since its inception, it recently expanded to Canada, where it said it now serves 50 percent of Canadian households.

With Instacart Pickup, the company is adding another option for consumers, who can now choose to save on the delivery fee if they’re willing to drive to the store and collect their pre-picked groceries themselves.

During the trial phase, Instacart has been soliciting feedback from retailers and consumers, and it is already working with a number of outlets — including Wegmans, ALDI, Cub Foods, Food Lion, Price Chopper, Publix, Schnucks, Smart & Final, Sprouts, and Tops Friendly Markets — in 25 locales around Atlanta, Boston, Charlotte, Minneapolis, Nashville, San Francisco, and Washington, D.C.

“Our customers want choice, and we’re excited to now offer the pickup option they’ve been asking for,” said Instacart’s chief business officer, Nilam Ganenthiran. “For families that are out and about and running errands, a pickup solution might be a better fit for their family rhythm.”

Today’s launch comes amidst heightened competition in the same-day delivery realm. DoorDash has raised around $800 million in funding this year, and it recently launched a new grocery pickup option, in addition to a $10 monthly subscription for free deliveries.