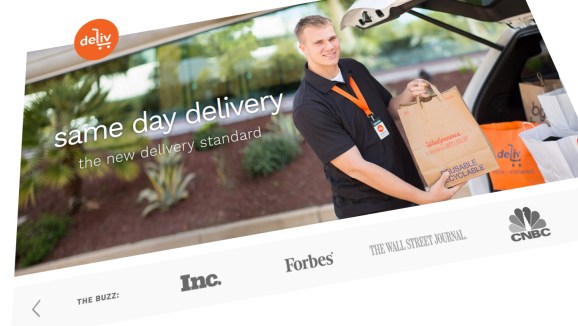 Founded in 2012, Deliv serves as a delivery network for major companies that include Best Buy, Macy’s, Home Depot, and Walgreens. Interestingly, in relation to today’s news at least, Deliv has also previously served the Google Express shopping service.

Deliv basically allows anyone who owns their own car to become a delivery driver in their locale, and the platform is available in hundreds of cities across the U.S.

The Menlo Park, California-based startup had previously raised $40 million in funding, including a $28 million series B round back in early 2016, and although another $40 million in the bank is nothing to be scoffed at, the caliber of its investors is perhaps of particular note here, as they span technology, automotive, transportation, and logistics companies. Google’s inclusion is also interesting, given that Google is making the investment itself, rather than through one of its venture capital (VC) arms — this is clearly a strategic investment by the internet giant that will ultimately boost its own ecommerce delivery offering.

“The backing by our new and existing strategic investors highlights the fact that Deliv is at the forefront of megatrends connecting the world’s largest industries,” said Deliv founder and CEO Daphne Carmeli. “We embrace the challenge of creating the future of last mile logistics with the support of this unparalleled group of strategic investors.”

Same-day “last mile” delivery services have emerged as big business, as companies strive to get goods to consumers as swiftly as possible — it’s one way they can hook customers into their respective commercial ecosystems.