In the months since the debut of Qualcomm’s Snapdragon Wear 3100, its first new high-end wearable chipset in two years, smartwatches sporting the system-on-chip have been conspicuously far and few between. The prohibitively expensive ($995) Montblanc Summit 2 was the first; Louis Vuitton, which launched the $2,500 Tambour Horizon in May 2017, said in early fall that its watch was forthcoming. But there’s finally some good news for smartwatch fans champing at the bit: As of today, an affordable model is joining the lineup.

Fossil Group — the Richardson, Texas-based American fashion designer and manufacturer whose brands include Michael Kors, Marc Jacobs, Diesel, Kate Spade New York, Burberry, and Emporio Armani, among others — this week unveiled the latest-gen Fossil Sport Smartwatch. Besides the Snapdragon Wear 3100 and a host of features driven by Google’s recently redesigned Wear OS, it’s the first of Fossil’s wearables to feature in a new campaign led by model and distance runner Candice Huffine. And it’s priced at $255, making it far and away the cheapest Wear 3100-packing device yet.

“With an everlasting personal mission to empower women to embrace their authentic selves and love the skin they are in, Candice has combined her two passions of fashion and sport,” Fossil wrote. “It is with great pride that Fossil chose Huffine to be the face of this campaign because she has inspired fans by spreading her message of positivity, inclusivity, and empowerment.”

The Sport Smartwatch — technically the fourth generation, replacing the Gen 3 Q Control — takes a cue or two from the recently released Q Venture HR. The three buttons (“pushers”) rounding out the right-hand side, facing toward the hand — two of which act as programmable shortcuts, flanking a textured crown that scrolls through notifications when rotated and surfaces a list of installed apps when tapped — protrude from the otherwise smooth, rounded aluminum-and-nylon topring. The minimalist case comes in two sizes, 41mm and 43mm, and in six colorways, all paired with sweat-flecking 18/22mm silicon straps in designs like pink, blue, bright purple, dark orange, gray, and more than 28 others. 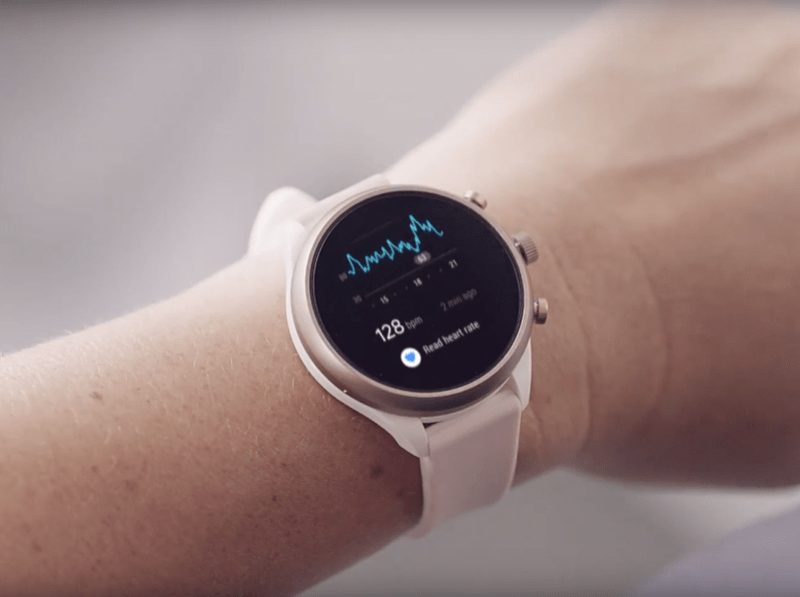 That’s all to say the Sport Smartwatch bears little resemblance to its predecessor, which was effectively a rebranded version of the Misfit Vapor. (Fossil acquired Misfit in 2015 for $260 million.) Fossil claims that the new design makes it “the lightest smartwatch to date,” even accounting for the bevy of sensors including NFC, heart rate, GPS, altimeter, accelerometer, gyroscope, ambient light, and microphone. It’s a bold claim we’ll have to put to the test once we lay hands on the thing.

The Sport Smartwatch is improved in other ways. The 350mAh battery — which Fossil said is larger than the outgoing 3rd Gen Q Control’s — lasts “more than a day” (24 hours+), with a power-saving watch mode delivering an additional two days. That’s thanks to the Snapdragon Wear 3100’s “big-small-tiny” architecture, which pairs four A7 cores with a digital signal processor (DSP) and ultra-low power coprocessor.

It’s unclear whether the Sport Smartwatch supports the Snapdragon Wear 3100’s other power-saving modes, like traditional watch mode, which displays a basic animated watch face to save power, and dedicated sports mode, which enables core features like heart rate and GPS tracking but nothing else. We’ve reached out to Fossil for clarification.

As far as the rest of the under-the-hood specifications are concerned, the Sport Smartwatch has an AMOLED 1.2-inch screen with a 390 x 390-pixel resolution, 512MB of RAM, 4GB of internal storage, and Bluetooth 4.2 LE. The outer case is waterproof at up to five atmospheres of pressure (5 ATM). What is clear, though, is that the Sport Smartwatch ships running the newest release of Wear OS. The improved Google Assistant is more proactive than before, helpfully collating information about upcoming appointments, calendar items, weather, traffic conditions, and more. Smart Replies — contextually appropriate message responses, complete with emojis — are in tow, as are a revamped app shortcuts menu and a redesigned Google Fit. The latter’s gamified points system, which was co-developed with the American Heart Association and World Health Organization, rewards wearers for spending time physically active and for following through with physically demanding workout routines. If they so choose, it’ll periodically prod them with motivating tips and pointers.

The Sport Smartwatch comes preloaded with three custom watch faces that incorporate Move minutes and Heart points into their designs, Fossil said, and two apps — Spotify and Noonlight. It’ll be available for purchase starting November 8 and in select Fossil retail stores on November 12.