Microsoft took the wraps off of a slew of new AI features in Power BI today, and it didn’t stop there. The Seattle company also announced a collaboration with Unity Technologies that’ll bring Microsoft Research’s AirSim, an open source aerial informatics and robotics platform, to Unity. Previously, it was available exclusively for Epic’s Unreal Engine.

AirSim on Unity is available for free on GitHub.

AirSim, for the uninitiated, taps machine learning to simulate environments with realistic physics for systems-testing drones, cars, and more. It includes a suite of software supporting off-the-shelf devices from brands like DJI and MavLink and exposes APIs to make retrieving data from virtual test vehicles a plug-and-play affair. It also works with hardware-in-the-loop, such as flight controllers and driving wheels.

Basically, it’s intended to be used as a safe, cheap testing ground for autonomous machines — a means of collecting data prior to real-world prototyping.

“The aspirational goal is really to build systems that can operate in the real world … I can actually use the same code base to fly a glider or drive a car,” said Ashish Kapoor, principal researcher at Microsoft Research and AI. “That’s the next leap in AI, really thinking about real-world systems … The whole ecosystem needs to evolve.”

“Our goal with AirSim on Unity is to help manufacturers and researchers advance autonomous vehicle AI and deep learning,” Kapoor said. “Unity gives its automotive manufacturing clients the ability to develop realistic virtual environments in a cost-efficient manner and new ways to experiment in the world of autonomous and deep learning.”

AirSim joins another recently announced simulations solution for Unity: SimViz Solution Template package. Through a partnership with CVEDIA and INDAGO, developers can leverage it to set up autonomous driving simulations quickly. 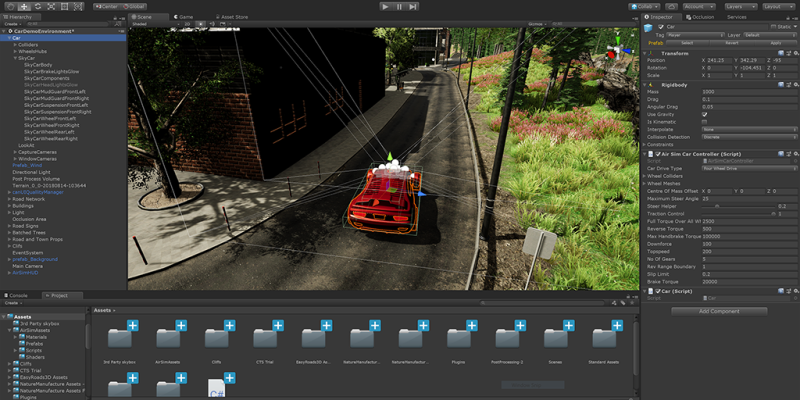 Today’s AirSim on Unity announcement comes a little over two weeks after Microsoft introduced a Windows 10 software development kit for drones. At DJI’s AirWorks conference, the Seattle company also debuted AirMap, a service that helps users stay in compliance with local laws and avoid collision with other drones.

In related news, the company this spring launched a partnership with DJI to create the software development kit and explore flight control and data transfer with Windows 10 PCs. And in September, Microsoft released ROS1, a build of open source robotics middleware Robot Operating System for Windows.