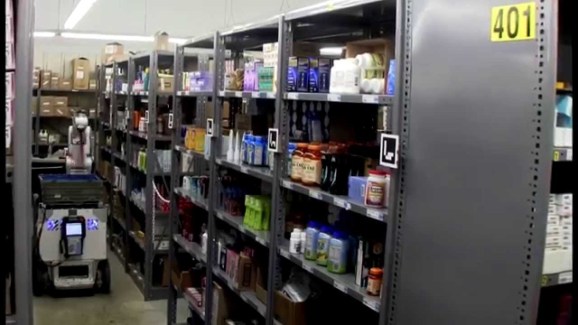 There’s a lot of money in robotics — particularly in logistics robotics. The industrial machines market is forecast to be worth $41.23 billion by 2020, according to Grand View Research, with startups like GreyOrange and RightHand leading the charge. But they’re not the only game in town.

Pittsburgh startup IAM Robotics today announced that it has raised $20 million in a funding round led by KCK, a family fund with investment teams in New York and San Francisco. Joel Reed, CEO and president of IAM Robotics, said the company will use the new capital to build out its sales, marketing, and delivery division.

“Distributors and retailers need more workers to meet the demands of ecommerce. In the U.S. alone, consumers spend 40 billion hours picking items from store shelves,” Reed said. “As we buy more items online, that work moves to the warehouse. Currently, there are not enough people in the workforce to do this for us. The answer is to give organizations a tool that increases existing worker productivity, fosters greater job satisfaction, and maintains operational flexibility.”

“We’re expanding what is possible to accomplish with autonomous robots,” Galluzzo said. “There is a great deal of buzz around autonomous cars, but we see shorter-term opportunities to put autonomous robots to work performing tasks that will have a huge impact on global logistics operations. This funding will help us to recruit the talent needed to make autonomous robots an immediate reality.”

Swift, which stands about 74 inches tall, boasts integrated 60-degree obstacle detection tech and a high-powered wheelbase. It’s capable of navigating aisles and transporting products at “human-level speeds” for up to 10 hours on a charge, IAM says, and can work alone or simultaneously, as a fleet. And thanks to proprietary computer vision algorithms, its suction-gripper arm can see and locate objects up to 15 pounds from both sides of an aisle — even on shelves up to seven feet high — and carefully place them in a swappable tote.

Rounding out IAM Robotics’ product suite is Flash, a machine learning-powered product dimensioner and photo booth that can record the barcode, 3D dimensions, weight, and high-resolution image of any product placed inside it, and SwiftLink, an autonomous software system that relays order and task status to warehouse management systems and logs performance reports. SwiftLink integrates with socket messaging and cloud services, and ships with a companion app — SwiftLink Viewer — that quickly surfaces robot statuses and metrics like pick rate, accuracy, and time-on-task. 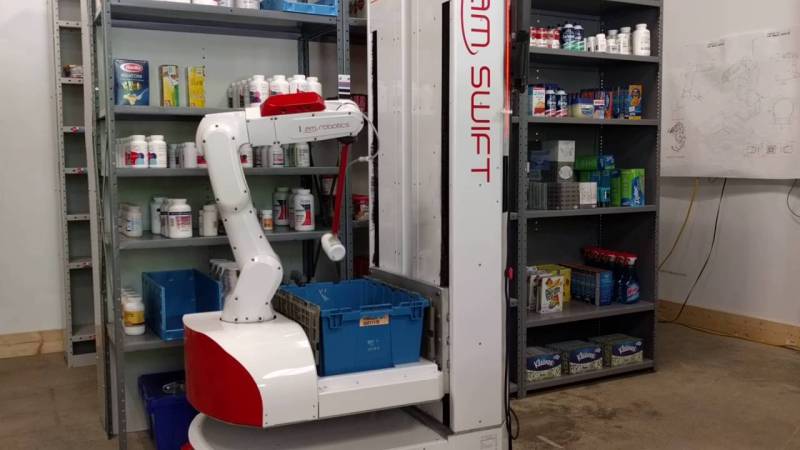 IAM chose not to disclose its client list, but said that one customer — Rochester Drug Cooperative, one of the largest health care distributors in the U.S. — is in the process of deploying a set of Swift robots across over 15,000 different SKUs.

“Companies along the supply chain have tested a range of new technologies, but the industry is still seeking a complete solution because the core problem of labor remains unresolved,” Reed said. “We are working with leading retailers and distributors to build more efficient systems around our robots.”