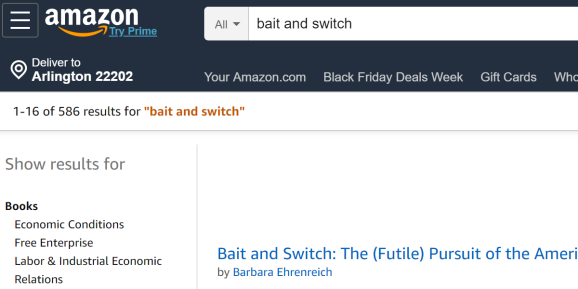 In September 2017, Amazon kicked off a frenzy from local governments with its announcement that North America would be blessed with a “second headquarters” (HQ2). City officials across the country have been bending over backward to please Amazon in the hopes of bringing the promised 50,000 jobs to their district. And this week, 14 months later, Amazon simply split HQ2 into two non-HQs across Queens, New York and Arlington, Virginia.

Almost all the focus has been on what New York City and Arlington will hand over to Amazon ($1.5 billion and $573 million, respectively, among other incentives), and rightly so. But I want to talk about what a brilliant bait-and-switch this has been on Amazon’s part.

Two hundred and thirty-eight cities and regions battled against each other for more than a year, giving Amazon hundreds of millions in free publicity and garnering billions in state and local tax concessions. And for what?

For Amazon to do what’s best for Amazon, that’s what. Did cities really expect anything else? The “2” in “HQ2” apparently means double the incentives. The “winners,” meanwhile, get half as many jobs.

Remember when Apple, the other $1 trillion company, announced a new campus and a promise to create 20,000 new jobs over 5 years? Comparisons to Amazon’s HQ2 were immediately made, and then quickly quashed.

Apple never said it was opening a new headquarters. But Amazon did, and it still is.

This week’s press release is silly. It is headlined “Amazon selects New York City and Northern Virginia for new headquarters” with a subhead immediately below saying “two new headquarters” and the first paragraph claiming “the new locations will join Seattle as the company’s three headquarters in North America.”

The idea of a “second headquarters” was always a stretch. It made no sense given the definition of the word “headquarters” and looks even more ridiculous when spread across two locations.

These are not headquarters, by any definition. These are new offices.

And new offices are not what Amazon promised.

Too late now: Cities took the bait 14 months ago.